Skip to content
HomeRace to the APEX For Non-Stop Entertainment

A huge plaza known as the APEX Center of New England recently opened in Marlborough, Massachusetts.  It is located on US-20, near Exit 24 on I-495.  One of the best parts of this new plaza is the APEX Entertainment Center, which just opened its three-story, quarter-mile long, go-karting track this week.

If you’re interested in more formal dining, the 110 Grill is a few doors down in the same plaza.  The management at APEX Entertainment provided me with an all-access tour and gave me the opportunity to try out the go-karts and the bumper cars.  My dad, my brother and I were greeted by Sherie Gaw, one of the managers at APEX Entertainment.

She showed us the sports simulators first.  Not only can you play virtual baseball, football, basketball, golf, and soccer, but you can also play other games such as zombie dodgeball.  They even have a carnival simulator.

Next, she took us to one of her favorite spots, where we could get a great view of the bowling alley and the movie-screen sized TVs. From where we were standing, we could see all 30 bowling lanes, some of which are candlepin lanes.  In addition, they have a special feature in some of the 10-pin lanes called Angry Birds bowling.  For dedicated bowlers, they will have leagues starting this summer.

The APEX is also a great place to watch sports.  Their bowling alley includes several huge TVs, and there are many more TVs around the Pit Stop Tavern and the bowling alley.  We had a great time when we came there to watch Week 17’s match-up between the Patriots and Jets, the game that secured home-field advantage for New England.

On our way to the go-kart track, we walked by the classic section of the arcade, which included 1999 NFL Blitz and a vintage hockey game. 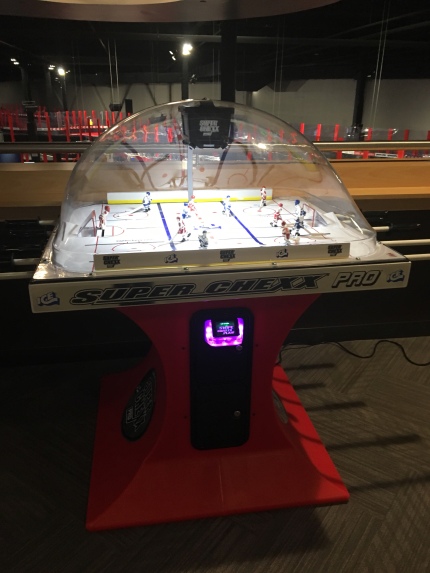 After that, we headed right to the go-kart track, known as the IC Federal Credit Union Speedway.

Nobody was racing yet when we got there, so Sherie took us on a walk around the track.  It was the longest, most interesting go-kart track I had ever seen!  The track is a quarter of a mile long.  Sherie led us through one lap in the direction that the go-karts are supposed to go.  I even got a picture in the special 110 Grill go-kart after!

Next up, we walked through the part of the arcade filled with lots of new arcade games.  Next to the arcade were the bumpers cars. There are six bumper cars and my dad, my brother, Sherie, 2 other APEX employees and I filled the arena and had some fun-filled bumping action.

Once the go-karts opened for the afternoon, we registered ourselves and the three of us had the whole track to ourselves as they had just opened.  We put on head-socks and sized ourselves for helmets, and soon enough, we were in the go-karts and ready to race.  The maximum speed for the go-karts was 40 mph, but we went around 20 mph.  Although I wasn’t going at full speed, it was the best go-kart ride of my life!

My favorite part is where you go down to the lowest part of the track, through a tunnel, and right back up.  Soon after that, you can make a hairpin turn that leads you up to the highest part.  On your way back down, they say you can even get some air if you’re driving at top speed. 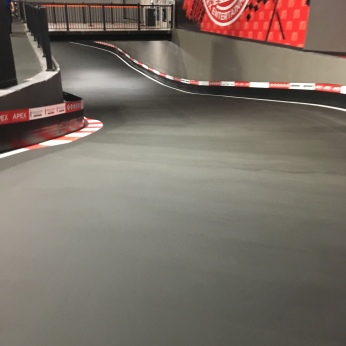 A view of some of the huge APEX go-kart track

After the race, we went upstairs to play arcade games and cool off with a refreshing iced beverage from the Pit Stop Tavern.  My dad and I faced off in NFL Blitz.  He played as the Patriots and I played as the Eagles.  Although I was upset that he beat me 31-3, I was also happy that the Patriots won as we were simulating this year’s Super Bowl match-up.

Before I left, I watched a number of racers going at top speed in a very competitive race.  Check out my video of two racing drivers here:

I’d like to thank Sherie Gaw for taking the time to show me a first class APEX experience and Ashley Coffey for setting it up.  If you haven’t visited yet, I recommend that you race to the APEX for non-stop entertainment.