Skip to content
HomeAFC Championship Preview: Pats Will Go To Another Super Bowl After Win over Jags

With Ben Roethlisberger, Matt Ryan and Drew Brees among others out of the running for Super Bowl LII, Tom Brady is the only experienced playoff QB left, and the Patriots have a good history against young quarterbacks.

You can’t write off the Jaguars though. They did edge out the Steelers 45-42 despite giving up 469 yards and 5 TDs to Steelers QB Ben Roethlisberger. In addition, Tom Coughlin knows how to beat the Pats after beating them in two Super Bowls as Giants head coach. However, they’re led by Blake Bortles, an inconsistent QB.

In order for New England to win, they’ll need to stop the run, which will be difficult against star RB Leonard Fournette. They’ll also need to pressure QB Blake Bortles to slow down a powerful, but inconsistent Jags offense. Offensively, they’ll need to protect Brady at all costs and make sure he can find open receivers and get into an offensive rhythm. However, it may not be about throwing TDs. I think we will see a lot of run first offense in this game. The Pats and Jags have both struggled to stop the run.

The Jaguars will need to shut down New England’s top receivers like Rob Gronkowski and Brandin Cooks, and they need to keep QB Tom Brady under pressure. They’ll also need to get the run game going, as the Pats don’t always do well against powerhouse running backs like Leonard Fournette.

For injuries, Pats QB Tom Brady has been dealing with a hand injury, but he is expected to play through it. RB Rex Burkhead will also be back after missing time due to an injury. However, DT Alan Branch and RB Mike Gillislee are inactive. It won’t be as easy as the fans expect, but I do see the Pats winning, 30-20, with the three-headed monster of Pats running backs combining for 150+ yards and a TD. They will be headed to their third Super Bowl in four years. 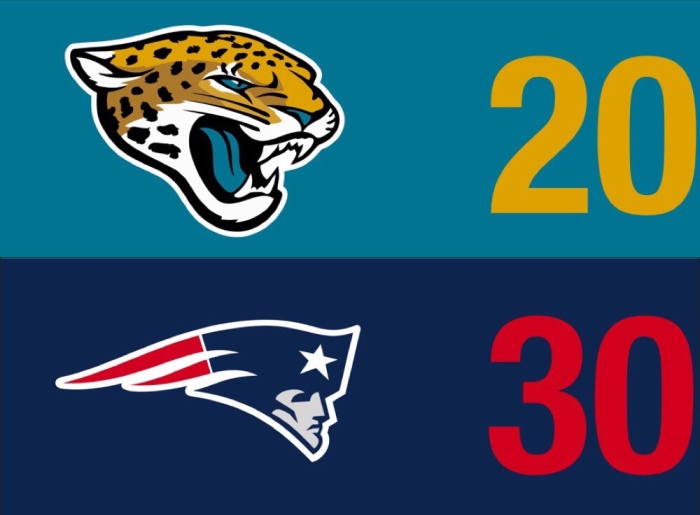