It was 31-31 in overtime.  After winning the toss, the New England Patriots had the ball on 3rd down at the Kansas City 30 yard line.  QB Tom Brady had made two straight third down conversions going to WR Julian Edelman, but this time, he looked in the direction of TE Rob Gronkowski.  Gronk had not been himself for most of the season.  But after stating that he would ‘seriously consider’ retirement with the conclusion of the season, he had stepped it up so far in this game, with 5 receptions for 64 yards.  He was tightly covered by S Eric Berry, but it didn’t matter.  He reached up and caught it, keeping the Patriots’ drive alive with a clean set of downs.  After that, Brady handed it off to RB Rex Burkhead three times, and he finished the job.  Touchdown.  37-31, Patriots win! The Patriots are now headed to their 4th Super Bowl in 5 years, as Brady looks to ‘Blitz for Six’ and Gronk looks to potentially end his career with a bang.  The best part is, as intriguing as a Brady vs. Drew Brees match-up would be, they’re playing the Los Angeles Rams, taking the Brady-Belichick dynasty back to their roots.  Back in 2001, Brady led the Patriots to their first Super Bowl victory over the QB Kurt Warner-led St. Louis (now Los Angeles) Rams.  You could also compare that victory to tonight’s when Brady and co. took down QB Patrick Mahomes II and an explosive Chiefs offense after coming in as 3 point underdogs.

The Pats set themselves up for success with a strong start to the game where they showcased complimentary football.  The Pats were in no rush in the 1st quarter, so they took their time, running the ball and eating clock on their first scoring drive of the game.  It was important to get into a rhythm early on to keep up with the Kansas City, but keeping the ball for 80% of the first quarter works.  Their opening drive was the longest playoff opening drive in the history of the Brady-Belichick Patriots.  The Pats held Kansas City to under 3 minutes of 1st quarter possession time by sacking Mahomes and shutting down the Chiefs offense quickly.  Preventing the Chiefs from developing a rhythm of their own also works.  In fact, while the Pats had 100+ total yards after one quarter, the Chiefs had negative yardage.

New England had another drive going that continued into the 2nd quarter, but things went south when Brady threw an end zone pick to LB Reggie Ragland.  The Chiefs had just successfully pressured TB12 and taken control of the turnover battle in one measly play.  Many people say this was a blatant mistake by Brady, but I saw it as a job well done by an underrated, young Chiefs D.  Though the Pats had lost their rhythm after marching down the field, they did shut down the Chiefs easily after the interception, forcing 3 and out.  With just about 7 minutes left in the 1st half, the Pats had 155 total yards, and the Chiefs still had just -2.

It took a bit for the Pats to get back into the swing of things after the pick, but on a deep throw to WR Phillip Dorsett, they scored again two drives later.  Utilized as a receiver, White led them through majority of the drive, but it was the deep throw to  Dorsett that scored the TD for New England.  After their defense’s big showing in the first half, the Pats held a 14-0 lead at halftime.  The defense had held the Chiefs to just 32 total yards in the half, and this was the first time the Chiefs had been shutout in the first half at home in 51 games 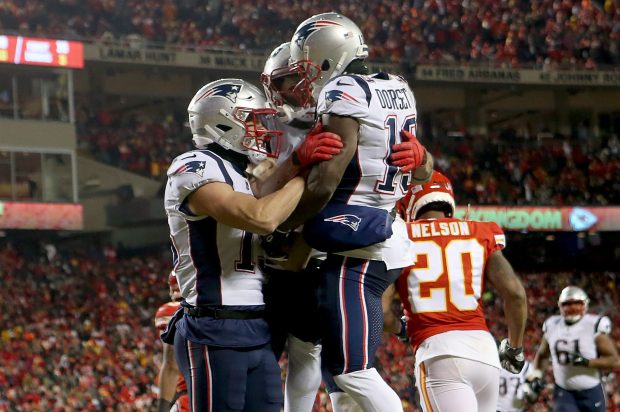 However, the Chiefs figured out New England’s formula in their first drive after halftime, marching down the field in 4 plays for a TD thanks to a huge catch by WR Sammy Watkins and a quality TD by TE Travis Kelce in tight coverage.  Preventing big plays is a definitive weakness of the Pats D.  The Patriots needed to extend their lead so they didn’t have to press the panic button when Mahomes and co. started dominating.  They failed to score another TD in the 3rd quarter, but they did add a field goal to their lead, making it 17-7 Pats.  However, Mahomes and RB Damien Williams led the Chiefs on a huge drive to end the 3rd quarter.  This one did end in a touchdown, narrowing New England’s lead to just 3 points after a somewhat questionable pass interference call.  It had been 14-0 at half, but the Chiefs offense had just taken control of the game, outscoring New England 14-3 in the 3rd quarter. 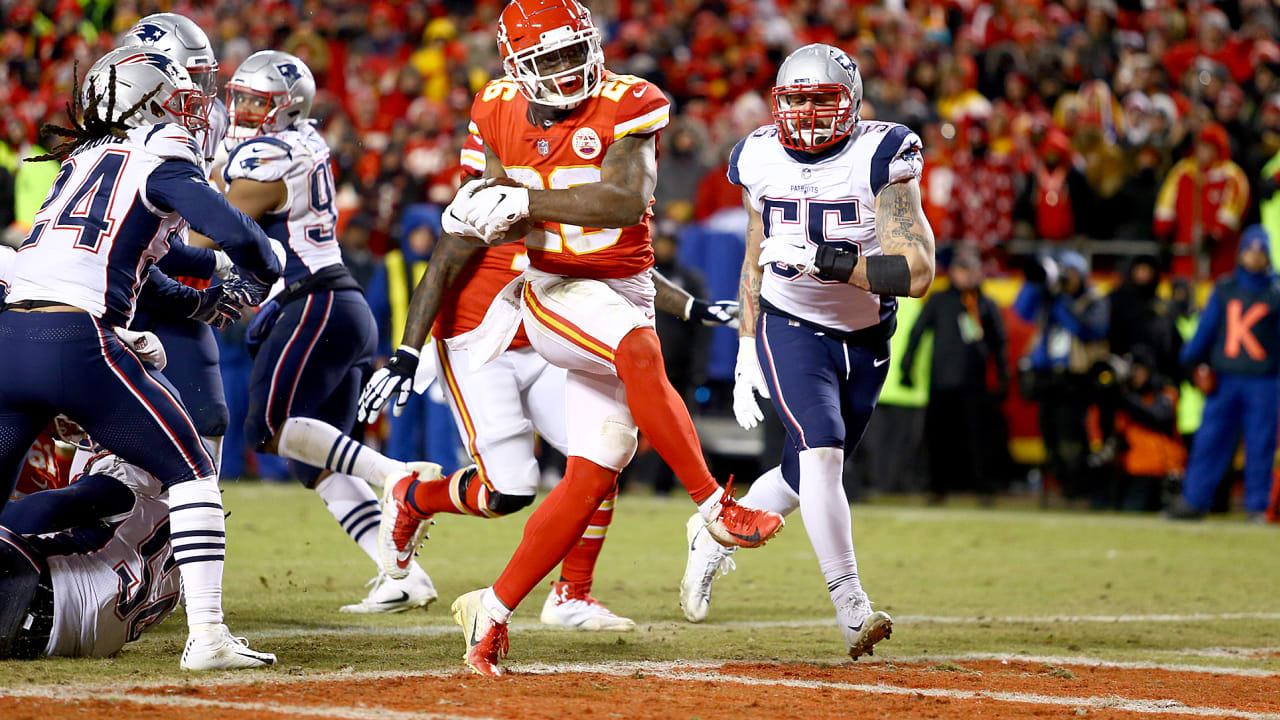 The Pats tried again to score a TD at the beginning of the 4th quarter, but they couldn’t convert on 4th down.  They forced the Chiefs to punt on the next drive, but initially, the refs called the punt muffed by Edelman when the Chiefs picked up the ball.  However, the call was overturned after instant replay showed that Edelman never touched it.  Edelman ended up costing the Pats the following drive though, as he bobbled a pass, allowing the Chiefs to intercept it and go on to take the lead with a TD the following drive.

The 4th quarter was a back and forth battle with several lead changes.  The Pats and Chiefs each scored a touchdown on their next drives, making it 28-24 Chiefs.  With two minutes to go, the Pats had the ball in what was still a one possession game.  The Pats marched down the field and Burkhead scored the TD, but they scored a little too fast.  They left enough time for the Chiefs to add a field goal to tie it up and force overtime.  It was 31-31.

After that the Pats won the toss, and though it was a nail biter with many close calls and 3rd downs, the Pats made their way down the field for the TD, winning the game!  This was Brady’s third OT victory in a postseason game, making him the first player to do so.  This was also the first time two playoff games had gone into overtime in one day.

Despite 2 interceptions, Brady finished 30/46 with 348 passing yards and a TD.  Sony Michel rushed for 113 yards and scored two TDs, and Burkhead had two rush TDs of his own.  Edelman and Gronk each had 75+ receiving yards, and James White nearly had 50.

Mahomes threw 3 TDs and 0 interceptions as the Chiefs won the turnover battle despite losing, but Mahomes only threw for 295 yards, partly because the Pats had the ball for much longer.  Though Watkins had 114 receiving yards, Damien Williams caught 2 TDs as well as rushing in one.

It’s hard to name one MVP for the Pats in this game, because everyone did their job.  The important thing is, the Pats will travel to Atlanta to take on QB Jared Goff, RB Todd Gurley, and the Los Angeles Rams in Super Bowl LIII.  In Belichick terms, ‘We’re on to the Super Bowl’.  The Red Sox beat the LA Dodgers in the World Series just three months ago.  Can Boston teams not only win two championships in a year, but also beat the city of LA twice?

The Buccaneers may be bad again, even after drafting Jameis Winston with the first overall pick.  Winston was the Florida State quarterback, using tight end Nick O’ Leary as his main weapon.  He should start at QB, but Mike Glennon will challenge his throne as starter.

We already talked QB, so lets move on to running back.

Three running backs should all compete for the starting position.  They have Doug Martin, who was supposed to have his outbreak year in 2014, but struggled.  He could be back to being close to his normal state.  Bobby Rainey will chase him though, and Rainey had stats higher than his projection last year, but Martin’s improvements get in Rainey’s way.  I doubt he’ll be the number 1, but the third spot definitely goes to either young Charles Sims, or fullback Jorvorskie Lane, even fullback Evan Rodriguez.

Winston’s Tampa weapons should be between veteran Vincent Jackson, and 2014 outbreak rookie Mike Evans.  I expect Evans can keep it up, but Jackson has some skills to show this year too.

Austin Seferian-Jenkins should be the number 1 again to at least start the year, but I could forecast him having a break down season.  That opens the door for returning Buccaneer and Pats XLIX champ Tim Wright.  Wright was Gronk’s second hand man last year, and he can do the same, maybe even surpass the skills of Seferian-Jenkins.

Both the offensive and defensive line shold be great, between Logan Mankins on offense, and Gerald McCoy and Larry English on defense.  They need another defensive back though, and are left with safety D. J. Swearinger, but no star corners.

The Buccaneers have developing, but older talent that shouldn’t do much, but will do something to make an effort to make the team at least 31st rather than 32nd of 32, although like all teams, they aim towards going to Super Bowl 50.

The Raiders are one of three teams who made a few big moves, but still are bottom teams along with the Titans and Jaguars, all in the AFC.
Fantasy and Training Camp Outlook
QB

Derek Carr is a developing starter in Oakland, and they struggle to find a backup. But I think if Carr struggles, start Christian Ponder at quarterback. He tops Matt McGloin in the race for backup. Ponder got a little playing time with the Vikings last year, but was a third string quarterback. He can take his career up a notch.
RB

They lost key RB Darren McFadden, long time Raider, but have plenty of reserves. They snagged strong third string Roy Helu, and former Colt underdog Trent Richardson, and still have Latavius Murray and fullback Marcel Reece. Murray will fight Richardson for the lead spot, while the other is left a reserve. Most say Murray, but veteran Richardson should take it from young Latavius Murray in my opinion. They also let go of veteran Maurice Jones-Drew, left a free agent.
WR

Hopefully Michael Crabtree can rebound to take the lead role, but if not, they only have Andre Holmes, former Pat Kenbrell Thompkins, and developing rookie Amari Cooper. Meanwhile those guys do show power, and could be decent. I have an especially good feeling about Cooper.
TE

Mychal Rivera could be the starter again, but I would give it to rookie Clive Walford. The smart drafting Raiders snagged him and Cooper in the first three rounds.
Defense

This defense is one of he worst in the league, but Justin Tuck and Khalil Mack should lead the defense. I expect it to improve from last year, probably leaving the Jags in the bottom spot.
The Raiders now have a few sparking veterans, but are dominant in young talent drafted ver the past couple years. Smart in the draft, and free agency.