I know, it’s a little late.  But before we know the surefire winner of each series, I figured I’d share my NBA Playoff bracket.  Believe it or not, I don’t think Golden State’s championship-winning streak will stay alive.  But who could possibly beat the Warriors?  See my prediction below: 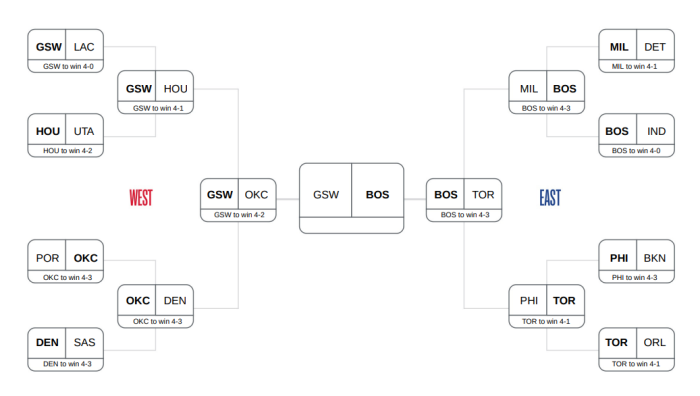 I have the Celtics taking down the Warriors in a 7-game series.  But how will they get there?

I think Boston should easily take down the Pacers.  With Victor Oladipo out of the picture, I cannot see Indiana doing much in these playoffs.  Kyrie Irving ruined the Celtics’ chemistry during the regular season, but I don’t think this will be as apparent in the playoffs, where the whole team will be motivated and willing to do whatever it takes to win it all.

The Pistons may have Blake Griffin and Andre Drummond to lead them, but that won’t be enough to pull off a series upset over Giannis Antetokounmpo and a powerful Milwaukee Bucks team.  However, the Celtics have multiple star players on their roster who will outplay Greek Freak’s teammates and help Boston win in the Eastern Conference semifinals.  I can’t see anyone getting in Toronto’s way until they face the Celtics.  The Raptors are by far the strongest team in their quadrant of the bracket, led offensively by Kyle Lowry and defensively by Kawhi Leonard.

But I do see Boston riding the momentum and overcoming adversity as they take down Toronto.  Their roster is stacked, so if the Celtics are on the same page motivation-wise and get off to a strong start (as I see them doing against Indiana), they could be a threat to Golden State.

The Warriors should not have a hard time with Western Conference opponents though.  Besides Boston, the Warriors are the only team I have sweeping their first round opponent.  The Rockets won’t be as easy an opponent as the Clippers, but a healthy Stephen Curry and Kevin Durant will outplay James Harden and Chris Paul.  I could see the Thunder, KD’s old team, making a run as well.  Portland is known for playoff choking, and Denver’s lack of experience could come back to haunt them.  I think they should be able to handle the San Antonio Spurs, but the Thunder might be a bit much for an inexperienced team like the Nuggets.

That’s all for my playoff predictions this year.  Stay tuned for more Celtics playoff coverage soon.