The Stanley Cup Playoffs begin today, and the Bruins will take on the Maple Leafs in Round 1 starting tomorrow, as they did last year. But will they go on to become Boston’s third championship team in the last year? I think they have a chance. They still own one of the best first lines in the league. They are also one of the league’s deepest teams. Defense and goaltending are slight concerns, but if the Bruins can score goals quickly, they should be able to put together a deep playoff run. My full bracket is below: 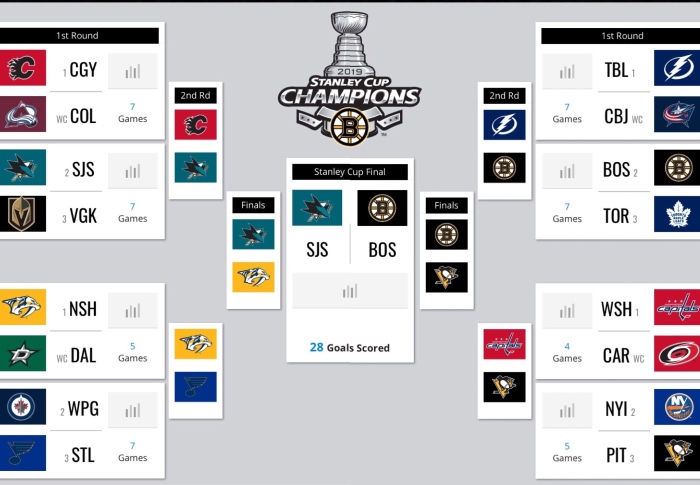 I have the Bruins taking down the Sharks in the Stanley Cup this year. The Sharks will be a tough opponent, led defensively by former Ottawa Senator Erik Karlsson and offensively by former Buffalo Sabre Evander Kane. Martin Jones may also outplay Bruins goalies Tuukka Rask and Jaroslav Halak. But I think the Bruins should be able to win in the end as long as the team gets into a rhythm and scores regularly.

It won’t be easy to get to the Stanley Cup either. The Bruins will not have an easy match-up in any round. The Maple Leafs provide significant offensive competition, the Lightning often dominate against the Bruins despite inconsistency, and the Penguins have never been an easy opponent for Boston.

I think Pittsburgh will make it over the Capitals, as they have historically tended to outplay the Capitals in the playoffs. The Caps went all the way to the Stanley Cup and finally came through in the playoffs last year, but I cannot see that happening again.

As for San Jose, the Flames are the league’s most improved 2018-19 team (as I predicted), and they may provide a challenge for the Sharks. The Predators won’t be so easy to take down either.

But in the end, it’ll be the Bruins taking down the Sharks in 6 or 7 games as they win their first Stanley Cup since 2011.

I think this could be an interesting series, as some of the current Bruins and Sharks including Logan Couture, Tomas Hertl, and Brad Marchand played in the AHL several years back. At the time, the Sharks still had an AHL affiliate in Worcester, Massachusetts. The Worcester Sharks were a frequent opponent for the Bruins’ AHL affiliate in Providence. Who will win this series when the stakes are at their highest? Feel free to comment with your thoughts.