Wow, it feels like yesterday when I started my website.  Today marks my 500th post.  I’ve had some awesome experiences along the way.  I was a guest writer for Bruins.com, had a 3-day internship at the Boston Herald, had my “Baseball Bits” quoted on Felger & Mazz on 98.5 The Sports Hub, did some sample recordings at 98.5, and was the co-MC of the Flutie Foundation 5K where I handed out awards with Doug Flutie.  Recently, I attended a 98.5 Patriots charity event for Families First at Mr. Sid and met Mike ‘Sarge’ Riley, a sports reporter for 98.5 and WBZ 1030 AM Radio.  He invited me for a tour of WBZ that would be known as the ”Super Sarge Salute.”

Yesterday Sarge gave me and my family an all-access tour of WBZ Studios, home of WBZ-TV, WSBK-TV, and WBZ 1030 AM Radio.  When I first walked in, I noticed images of some of my favorite WBZ Newscasters like Steve Burton, Dan Roche, Barry Burbank and David Wade.  I even saw digital posters of two of my favorite CBS shows, Young Sheldon and The Big Bang Theory. 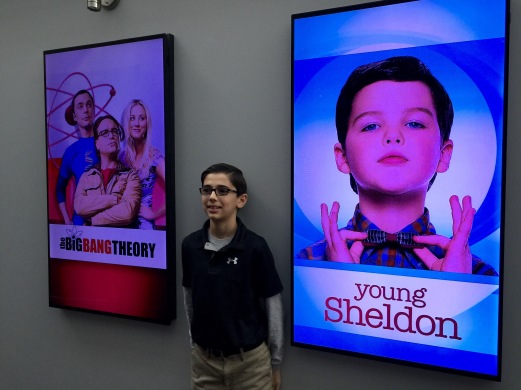 Sarge greeted us in the lobby and we began our tour.  He told us about the history of the station.  It started as a radio station in 1921.  It was one of the first radio stations in the country and the first in New England.  In 1948, WBZ-TV began airing.

First, we went to the Sports News anchors’ offices that included offices for Steve Burton and Dan Roche.  They had sports pictures all over the walls and it felt like being inside a miniature Boston sports hall of fame!

After that, we entered the huge newsroom.  TV reporters were on one side and radio reporters on the other.  The TV side was quiet but the radio side is always busy.  I got to meet Charlie Bergeron, another WBZ Radio sports reporter who I had just heard on the radio on the way to the studio.  He took the time to tell me about the specifics of his job and show me the sports update script he was currently working on.  I even got to go into the studio to watch his next live broadcast! 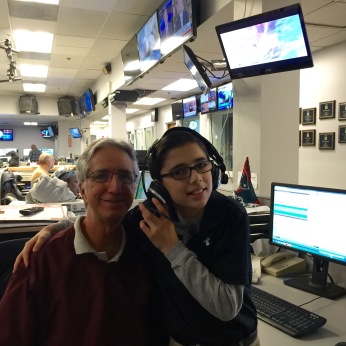 Next, I met the radio traffic reporters and saw a live image of the current traffic, which was noticeably quieter during the weekend.  I also saw part of their script for their next report.  After the newsroom, we visited a huge control room.  Sarge said that even he’s overwhelmed by it. 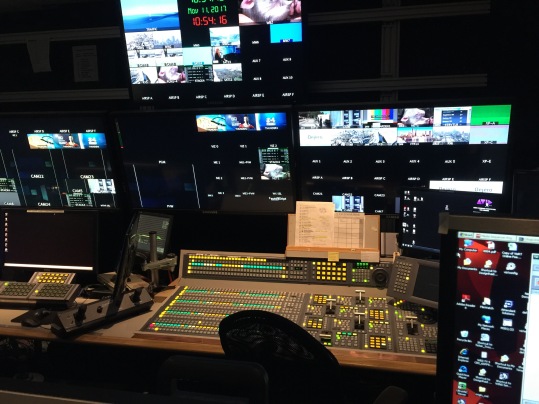 Then came the best part of my tour.  We got to visit both TV studios.  The first one we visited was mainly used as a backup studio but they did traffic reports there when the other studio was being renovated. 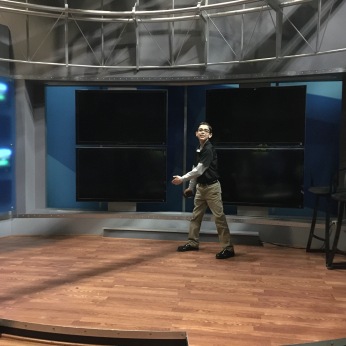 Me on the stage of the old studio.

My brother Ryan in the studio audience cheering me on.

Me on the left on the stage of the old studio and my brother Ryan on the right cheering me on in the studio audience.

But when I saw their main studio, I felt like I had just walked into my TV when WBZ News was on.

When I first walked in, I saw Barry Burbank, a meteorologist who I had grown up watching.  I had previously met him when he came to my elementary school, Peaslee in 2015, but I didn’t get the chance to talk to him until this day.

Then we saw the news anchors’ desk, the couch that was often used during Patriots 5th Quarter, and the area where they filmed the weather forecast.  We even saw snow in Michigan on the current radar, and according to Barry, it could be coming our way, but he didn’t want to forecast it yet.

On our way out, we got a glance at the WBZ Hall of Fame.  We continued to listen to Sarge on the radio on our way home.

That wraps it up for my 500th article on Boston Sports Mania.  This tour was an unforgettable experience and I’m grateful that I got to learn so much as I continue my pursuit to become a sports journalist.  I’d like to thank Mike ‘Sarge’ Riley and give him a huge #sargesalute for this amazing experience.