After a brief weekend break, players returned to practice on Monday 8/19.  Episode 5 highlights this practice.  Check it out below:

On Monday August 19th, their last day before putting on uppers, Algonquin looked great in all aspects of practice. But the coaches made sure that the players didn’t let it get to their heads as The next practice would be crucial in determining who was ready to be a football player.

The defense continued to improve. Coach Brooks was especially proud of the line performance.

For the offensive drills, the team focused on ball hand off and handling techniques. 2 standouts in the runs drills were junior captain and FB Rio Ferguson and senior RB Thiago Filadelfo. They were able to practice a lot with both of them in the backfield at the same time.

This is Thiago’s last year with the team as he will be graduating in May so it is great to see him get these opportunities to practice his skills after putting in a lot of work in the off season. The team worked the drills fast so Rio and Thiago could both benefit from the reps.

While running and handoff techniques were the focus on offensive drills, QB Riley Greenwald did throw the ball well, especially on a deep ball to WR/TE Derek Blanchard.

The team wanted to finish practice on a high note, and they were successful in doing so.

The team had practice jerseys ready to go with upper pads.

Coach Allen is learning more about his players every day and once the team puts on uppers and thuds it up a bit, things should become even more clear.

I saw Chris Ocnos back on the field. He brings a lot of positive energy and everyone was excited to see him out there after missing some practice earlier in the week.

I spoke with Ralph Gutierrez and Eli Khasabo after practice. Eli won a game of rock-paper-scissors in order to go
first.

Stay tuned to see how the T-Hawks do on their first day in uppers in Episode 6 of Gonk Knocks. 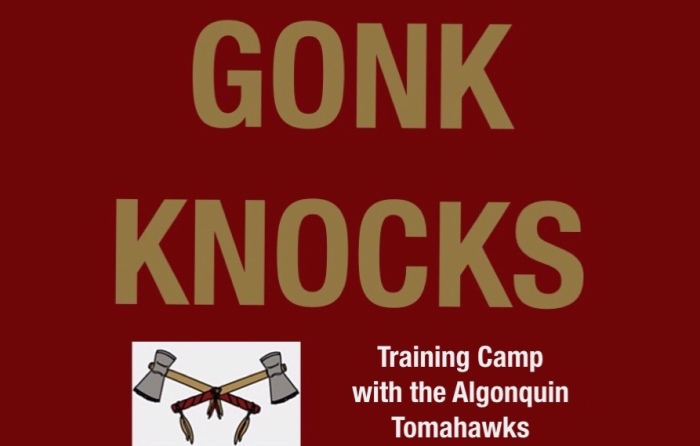