Starting with the Opening Ceremony this Sunday, July 1st, I will be in Seattle to cover the 2018 Special Olympics USA Games on behalf of the Doug Flutie, Jr. Foundation for Autism.  As a member of the press, I will follow golfers Tyler Lagasse of Massachusetts and Scott Rohrer of South Carolina.  Both golfers are sponsored by the Flutie Foundation this year and as a member of the autism community, I am honored to report on these two amazing golfers and inspiring individuals.

Tyler and Scott have finished 1st and 2nd in each of the last two Special Olympics USA Summer Games (New Jersey 2014 and Nebraska 2010).  Look for daily updates on Boston Sports Mania and on Flutie Foundation social media including their blog.

Read below to learn more about Special Olympians Tyler Lagasse and Scott Rohrer. Tyler is a 31-year old autistic adult from Tyngsborough, Massachusetts.  He began golfing in 2003 and has traveled to Connecticut, Florida, New Jersey, Nebraska, and several other places for Special Olympics tournaments.  He is a member of the Special Olympics hall of fame, won an honorary ESPY in 2017, and was even featured on a Golf Channel program in 2010.  He co-authored a book about autism with his mom, published in 2015 called What Do You Say?: Autism with Character.  Several times including 2014, along with a few other Special Olympics golfers, Tyler has been invited to the Pro-Am, a PGA event.

Tyler has never competed before on the 2018 Special Olympics course, Willows Run, but he has plenty of experience on 18-hole courses.  At the 2017 Pro-Am tournament, he played a round with a personal best score of 70, par for the 18 hole course.  He won silver at the 2008 Special Olympics National Golf Invitational in Florida as well as each of the last two USA Summer Games.  While Tyler has never won gold on the national stage, he is hungry for his first gold medal.  This past week, Tyler noted, “I want that gold medal so badly, I want to do whatever it takes to get it, because I may never have this opportunity again. To me as well as many others coming to Seattle, this is MY Olympics”.  Tyler is clear very competitive but in the book he co-authored with his mother Deborah Lagasse, golf is also therapeutic for Tyler.

“Golf sometimes makes me come face to face with my demons inside. I consider golf a tool for dealing with adversity because I have faced endless adversity all my life; most of us do sometimes. Golf also helps me feel good about myself, tests my resilience and mental toughness. I learned so much about myself through golf and it’s given me an identity, something that fits my personality and golf has allowed me to put my personality on display” (Tyler Lagasse).  Tyler also writes about every golf tournament in great detail so he was even able to provide me with some of his previous USA Games and Pro-Am stats.  He is proud to be sponsored by the Flutie Foundation.  “They’ve come out of their way in helping me surpass my fundraising goal for this year’s USA Games. I thank them for their support because they see me as a talented individual rather than one living with autism. And they see the gift that autism has, and that gift is hope” (Tyler Lagasse).

Tyler will be competing starting Monday July 2nd in the Level V Golf Tournament and his biggest competitor in this tournament will likely be Scott Rohrer, who is also being sponsored by the Flutie Foundation.

Scott Rohrer is an autistic adult from York, South Carolina.  He has golfed for 20 years and he was 7 when he started.  Scott had a personal and Special Olympics best of 71 (-1) in the opening round of the 2010 USA Games.  He topped that score at the 2015 Los Angeles World Games.  When another golfer beat that record, he only did better the next day.  He scored a 60 on a par-66 course to break the Special Olympics World Record.  He finished the tournament at a Special Olympics best -12.  He has won 7 gold medals on the national stage, including a gold medal in each of the last two USA Games tournaments.  Tyler Lagasse earned the silver medal in both of those tournaments.  Scott has won medals at other tournaments as well including a bronze medal at the 2014 World Golf Cup.

Scott works on a tree farm with his dad, Jeff in York from Monday to Thursday each week but spends the weekend on the golf course.  His golf games against his dad are pretty close but he usually out-drives his dad.  His mom Elizabeth is his caddy.  Scott can be very streaky.  He came back from a triple bogey and bogey to start the day to score a second straight 75 on Day 3 of the 2010 USA Games.  Golf brings Scott out of his shell, and people who play with him see him as a competitive golfer not as someone with autism who plays golf.

The big stage as Willows Run is set and now the question is will Scott Rohrer win another gold medal or will Tyler’s hunger and competitive spirit help lead him to victory and his first gold?

Previous Competitions Between Tyler and Scott 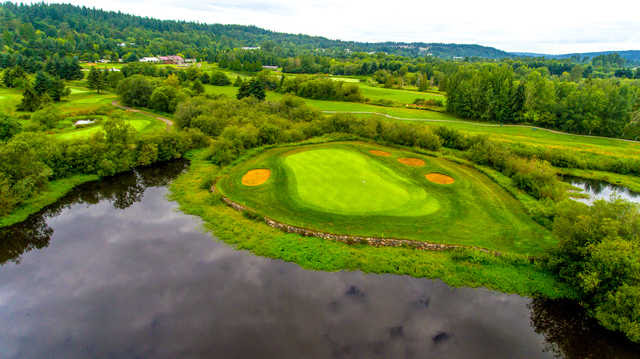 Willows Run is located in Redmond, Washington, about 20 minutes from downtown Seattle.  It includes two 18-hole courses, Eagles Talon and Coyote Creek, both of which are par-72 courses, just like the course that the 2010 USA Games golf tournament was held on.  Special Olympics Level V golfers will be competing on Eagles Talon from 8:30 AM-3:30 PM every day from July 2-July 4.  The course is over 6,800 yards in total and has a lot of long and narrow tree lined holes so hooking or slicing off the tee could definitely be dangerous.  The greens are playing fast, even though it’s been wet the last few days.

For more information on Willows Run, see my article from the day I arrived when I toured the course. (video below)

Other Level V Golfers To Watch For

There are 12 golfers participating in the high performance stroke play Level V competition, including Tyler and Scott.  I have provided a little information on the other golfers in their competition below.

There are two divisions within the Level V high performance competition.  Both divisions compete in the same pool, but Division 2 golfers are ranked separately for medals.  Tyler and Scott are Division 1, while some of these other golfers are Division 2.  Also, the expectation is the each day will  begin with a shotgun start so that more golf is ongoing at once, starting at 8:30 AM. 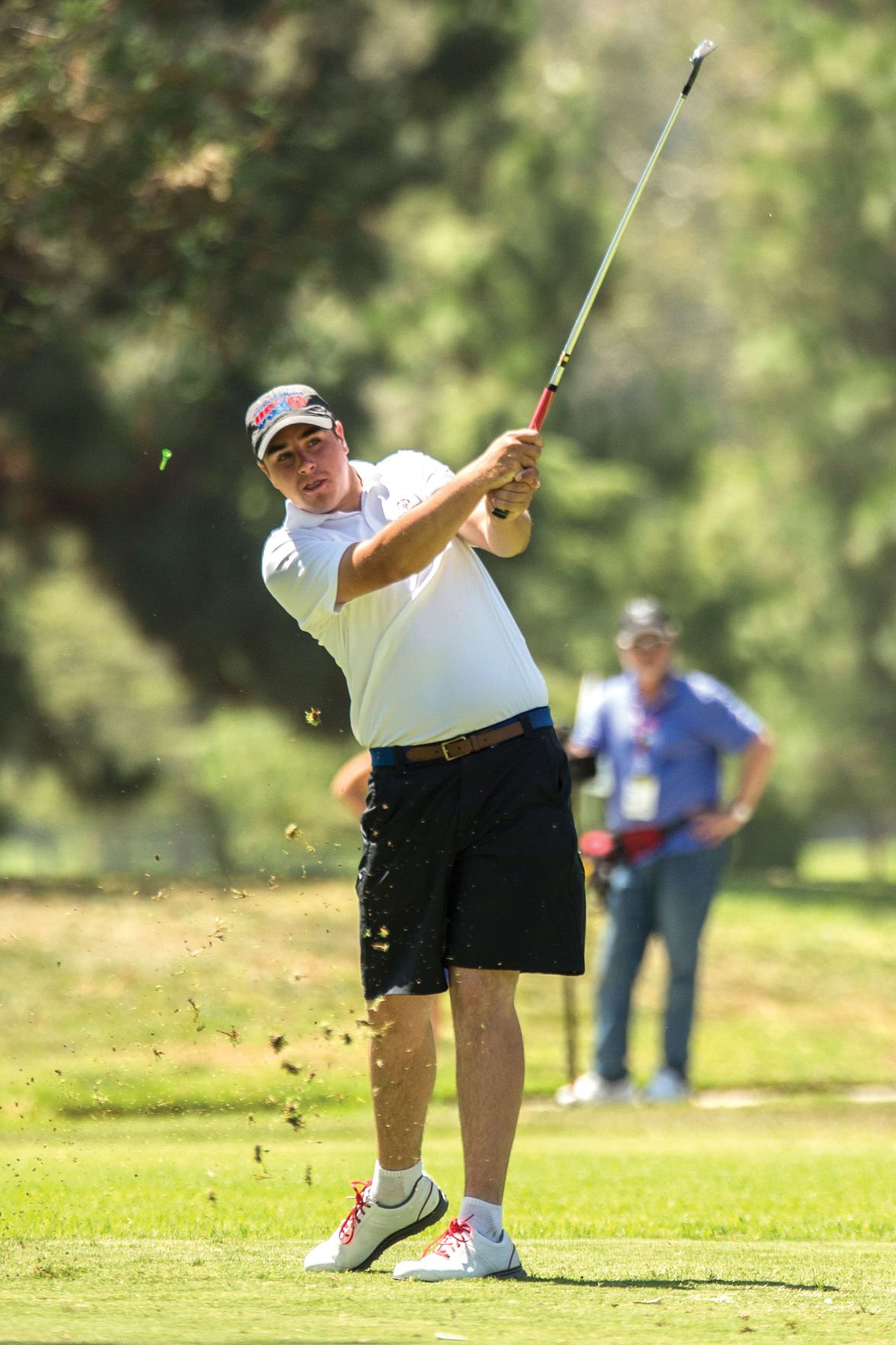 Stortz joined Special Olympics in 2007, participating in field hockey.  He eventually switched to his favorite sport, golf.  He is a member of Division 2 in the high performance stroke play competition.  He is eager to represent Alaska in the USA Games.  Special Olympics has changed his life as he has met many new people who share his passion for golf.  Stortz also participated in Level V Golf at the 2015 World Games in LA and the 2014 USA Games.  He won the Division 2 gold in 2014 and Division 2 bronze in 2015.

Murray is a longtime Special Olympics golfer who will be part of Division 2 in the Level V high performance competition.  He has been invited to the Pro-Am before and was not far behind Tyler Lagasse and Scott Rohrer the last time he competed in a Special Olympics national tournament (Nebraska 2010). He had a personal best 18-hole score of 73 in Nebraska and won gold in a lower division. He will also be competing in the Level V tourney in Seattle.  Murray is a longtime Special Olympics golfer.  Murray won the 2009 National Golf Invitational Level V Play and had the lowest score in Pro-Am history in 2013. Curtis joined Special Olympics Maine in 2007.  He will be participating in Division 1 of the Level V High Performance competition, but he has also played Unified golf in the past.  He came close to a medal at each of the last two USA Games and is hopeful that he can bring a medal home from Seattle.  He has won gold in the state competition each year since he started in 2007.

Cleek has been a multi-sport Special Olympian for over 10 years.  He won gold in a lower division in the 2014 USA Games, where he last played on the national stage, but this year Cleek will be part of Division 1, where he will have tougher medal competition like golfers Tyler Lagasse and Scott Rohrer.  Can he take home a medal as he moves up into the highest division?

Nicknamed the Mayor, Lussier has been competing in many sports for team Rhode Island over the last 10 years.  He has also competed in unified competitions with his dad as his partner.  They have developed a closer bond by competing together.  Chris also met his girlfriend, Amy, and many other friends from Special Olympics.  He won gold in the Level III Unified golf competition back in 2014.  He also won a medal in golf at the 2010 USA Games, and he even won gold in the unified golf competition at the 2011 World Summer Games.  This year, he will compete in the 2nd division of the Level V high performance individual stroke play competition. Stroud has participated in multiple sports at Special Olympics for ten years.  He says his favorite sport is definitely golf though.  Miles has a handicap of 9.2 as he enters the 2nd division of the Level V high performance individual stroke play competition.  He is a huge fan of all Texas A&M sports, and he cheers for the Aggies in his down time.  He won gold as a part of Division 4 of the Level V competition at the 2012 Special Olympics National Golf Invitational with a 72-hole score of 301.  Will Stroud take home a medal in Seattle as part of Division 2? Aoki has been golfing since age 6 or 7, and will compete in Division 1 of the Level V High Performance competition.  He plays golf in nearly all his free time, though he has just started a full time job as a chef.  He may be dedicated to golf, but can he keep up with the scratch golfers in his division such as Tyler Lagasse and Scott Rohrer? Marino started competing in Special Olympics at age 13.  He will compete in Division 2 of the Level V High Performance competition.  Marino has played as far away as China in Special Olympics golf.  Marino was paired up with Tyler Lagasse in the Opening Round of the 2008 National Golf Invitational, and they got along well.  Tony has also been a coach for Special Olympics.  Marino is happy to travel around the world and participate in multiple sports thanks to Special Olympics.

Braxton is a long time Special Olympics golfer and swimmer.  She has participated since 1981, and that was before Tyler Lagasse or Scott Rohrer was born.  She was ranked #1 among female Special Olympic golfers in the world in both 2007 and 2011.  She won the Division 2 gold at the 2010 USA Games and has participated in the World Games in 1991, 2007, and 2011, and won gold in both 2007 and 2011 when she was ranked #1 among females.  She also participated in golf at the 2014 USA Games.  Braxton will participate in the Division 2 High Performance Individual Stroke Tournament again this year in Seattle.  Will she take home another medal?

Condon has been playing golf since 2006.  He will be part of Division 1, Tyler Lagasse and Scott Rohrer’s division, in the Level V High Performance Individual Stroke Tournament.  Condon has loved golf ever since he started and is eager to participate in his home state in this year’s USA Games.  The question is, has he played on Willows Run before, and will home state advantage help him win a medal in a division that includes some of the country’s best?

Stay tuned for updates live from Seattle as the story unfolds.