I am honored to be a recipient of the Doug Flutie Jr. Foundation Shining Star Award which I received at the 2018 Night to Shine gala on Saturday, May 5th.

I was selected after emceeing the Flutie 5K in 2017.  For the last five years, The Doug Flutie, Jr. Foundation for Autism has awarded a select group of people and companies who have truly made a difference in the autism community.

My family and I arrived at the TripAdvisor headquarters right when Doug Flutie and his wife Laurie did.  Doug was carrying a huge cymbal but he and Laurie stopped to say hello and congratulations.  This was a great start to the night that would only get better.  We checked in at the desk in the lobby and I was handed a special honoree magnetic name tag to wear.

We headed down the hall and saw Milo, a robot boy built to help learners with autism learn social and behavioral skills (https://robots4autism.com/milo/).

We spent the first hour networking, catching up with people I knew, and meeting new people.  We talked to Nicole Gugleimucci from the Foundation who had helped me prepare for the Flutie 5K event last October and notified me about this exciting honor.  We also met the new Executive Director of the Foundation, Nick Savarese.

After meeting several more people, we looked at the many awesome sports-related silent auction items to bid on.  At our table, we met Paul Alexander, the Chief Marketing and Communications Officer for Eastern Bank.  Shortly after, we decided to wait on bidding and get seats near the stage.

We sat in stadium-style seats in a 4-story atrium area at the center of the TripAdvisor Headquarters, which had an amazing view of all the floors.  I also noticed walls made out of live plants which looked really cool.  The ceiling had a sky with clouds which made it feel like the outside was inside.  They had a huge movie-sized video screen counting down the time to start the ceremony.

Susan Wornick, a longtime reporter and former anchor from WCVB-TV in Boston was the emcee for the event.  After Wornick introduced herself and Doug and Laurie, she passed the stage and microphone over to MUSE.

MUSE stands for Music, Unity, and Social Expansion.  They are a school that teaches independence and more skills to people with autism through music (http://www.muse-foundation.org/).  A MUSE band got on stage to play two songs and they were very impressive.  Everyone clapped to the beat for their second song as the crowd got really into the music.

After a standing ovation, Wornick returned to the stage to thank the sponsors and invite Nick Savarese to talk about his first year with the organization.  Nick asked me and a few other guests to stand up and everyone cheered which was pretty cool and I really appreciated.

Lisa Borges was called to the stage.  Lisa had worked in Nick’s position nearly as along as the Flutie Foundation had been around.  They handed her a large flower arrangement and thanked her for all she had done.  Laurie and Doug came up to the stage and thanked her as well.

A video was shown about the history of the foundation, which dates back 20 years.  The video gave an update on Doug Flutie’s son Doug Jr. and showed how the Flutie Foundation started Autism Awareness and wants to continue to build on that.  They have helped so many with autism, including me.  Thanks to the Foundation, I learned to ski with my brother in one weekend and now skiing is one of my favorite activities.  This year I was able to join my school’s ski club which has been a great social opportunity for me. 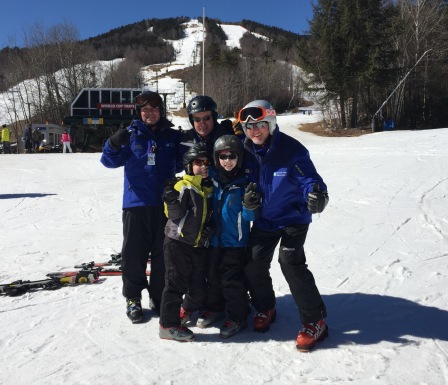 After the video, Nick talked about how the organization has evolved and will continue to do so.  I was happy to learn that they will also add focus on the many children with autism that will be entering adulthood soon, like me, or already are adults like Doug Jr.

Wornick returned to the stage to begin announcing the Shining Stars.  I was ecstatic when my name was announced and rushed to the stage as she read my bio discussing some of my achievements including my sports blog that I started when I was 10 (https://andrewr1008.wordpress.com/).  She handed me the award, a glass star-shaped trophy with my name on it.  They took photos of me with Doug Flutie, Nick, and Susan as people continued to applaud.

Get Air Sports (a trampoline park that supports the foundation http://getairsports.com/ ), Luca and Danni jewelry (https://lucadanni.com/), John Breen, Alan Seymour (Doug Flutie’s good friend from Junior High School), Wegmans (https://www.wegmans.com/), NCGIT (https://ncgit.com/), and Amy Weinstock (http://autismhighereducationfoundation.org/amy-weinstock/) were the other Shining Stars and Get Air gave the foundation a big life-sized check for over $200,000 on the stage.

Susan then began a live auction for four very significant donated prizes.  The bidding for some of the items went over $10,000 and it was really exciting to see some of the bidders go back and forth trying to win with the final bid amount.

After the auction was over, many of the hundreds of guests came up to me to congratulate me and we exchanged contact info.  I said hello to Lisa Borges and I told her I would be back for the 2018 Flutie 5K and hoped to see her too.  I met Tyler Lagasse who Nick had asked to stand up with me.  He has autism too and plays golf competitively and wrote a book with his mom (https://www.amazon.com/What-Do-You-Say-Character/dp/1503556840).  We even caught up with Susan Wornick who wants to put me in touch with legendary sportscaster Bob Lobel to see a Red Sox game!

I did not end up winning any silent auction prizes but Jayme Parker, a longtime NESN reporter, took a picture with me and said she would keep in touch with me.  The experience of meeting her was like an auction prize that I had bid on and I went home with just as much excitement as I had at the start of the night.  The event was so much more than I could have ever imagined and I am so grateful for the experience!

I would like to thank the Flutie Foundation for sharing this post on their own blog: http://www.flutiefoundation.org/blog/my-night-shine.

I would also like to give photo credit to Jenny Nourse Photography and thank them for the amazing pictures.