Skip to content
HomeRed Sox Report: Red Sox On A Roll Despite Many Injuries

(040818 Boston, MA) Boston Red Sox shortstop Xander Bogaerts is helped off the field after he injured his foot during the 7th inning of the game at Fenway Park in Boston on Sunday,April 8, 2018. Staff Photo by Nancy Lane

Can Boston teams sustain any more injuries?  First, the Celtics lost Gordon Hayward on Opening Night and later lost Kyrie Irving for the season.  Then the Bruins began sustaining a lot of injuries, and although they are still a strong playoff contender, it seems like another player goes down every time somebody returns.  And now as the Red Sox are off to a hot start, they are far from full strength.

Even though Eduardo Rodriguez has returned and Drew Pomeranz will be back soon, the Red Sox have continued to lose players to injuries.  This past week, Xander Bogaerts, Hanley Ramirez, Bobby Poyner, Mookie Betts, and David Price have all missed or left games due to injuries.  Hanley surprisingly only missed a game after taking a fastball on his hand/wrist area.  He hit a mammoth line drive HR in his first game back keeping his hot start going.

The Rivalry is Back: Red Sox Win In Heated First Series vs. Yankees 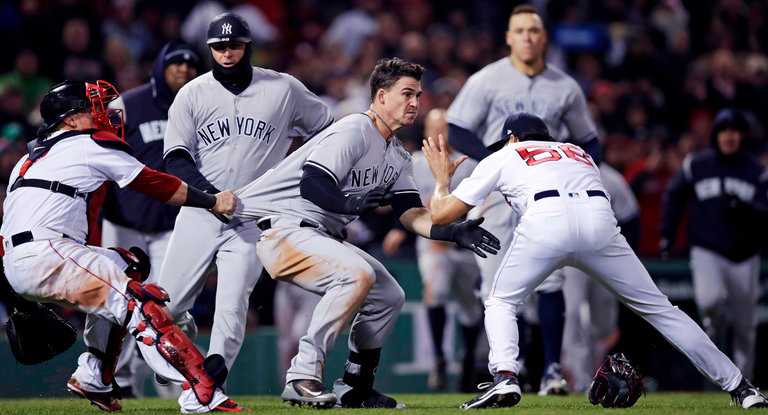 The Red Sox-Yankees rivalry is back and better than ever.  This year, with the Sox and Yankees likely to compete for the AL East title, expect exciting games between these two teams.  It did not take long for the intensity to get going in the first series.  There were two bench-clearing incidents in the second game.  I expect the tension to carry over into the next Red Sox-Yankees series and likely all of the remaining sixteen games.

Despite numerous injuries sustained by both teams, this was not a series you would want to miss. After a hot 8-1 start, the Red Sox were confident and ready to prove that their strong start was not a fluke.  After the Sox blew out the Yankees 14-1 in game 1, the Yankees came into game 2 with a little more fight.  They won the game and Yankees DH Tyler Austin spiked SS Brock Holt when he slid into second.  Tensions flared and benches cleared.

Another bench-clearing brawl occurred when Joe Kelly retaliated by hitting Tyler Austin later in the game and Austin charged the mound.  This one got both Kelly and Austin ejected and both of them have since been suspended.  Both players appealed to stay in the series and on the active roster until the hearing.  You will not want to miss a Red Sox-Yankees game this year as they are clearly the best 2 teams in the AL East.

By the time this game was over, starters Tanaka and Price were long gone as neither lasted too long.  Price had the worst outing of his career lasting only 1 inning.  He left after giving up 4 runs and was pulled before starting the 2nd due to a tingling sensation in his fingers.  It was a cold night and sports radio talk has speculated Price’s issues were related to the cold, his elbow, or maybe even anxiety.  Regardless, the Sox need Price healthy so whatever it was, the team and fans hope it was an isolated issue and he returns to pitching as well as he did to finish last season and start this one. On A Roll: Lineup and Rotation Have Shown Flashes of Excellence

The Red Sox may be missing a lot of players due to injuries but the lineup has been hot of late after a slow start and their rotation has looked like one the best in the MLB all season (except Price’s bad outing).  Hanley Ramirez is on fire despite suffering a wrist contusion this week and J.D. Martinez has heated up after taking a week or so to adjust to his new team.  He now has 3 HR and 13 RBI on the season, including a grand slam in Boston’s comeback attempt in Game 2 against the Yankees.

The Red Sox have now hit 3 grand slams this season while they had none in 2017.  Mookie Betts has also been on fire all season, batting .353, and Bogaerts was just as hot before his ankle injury on Sunday that got him placed on the 10-day DL.  Andrew Benintendi started hitting well at home and is 10 for his last 26.

The rotation has shown flashes of dominance too, and Red Sox starters have pitched quality starts in 3 of the last 6 games.  Rick Porcello even had a no-hitter through six on Thursday.  The defense has helped the pitching playing nearly flawless all year with only 3 errors on the season.  Jackie Bradley Jr. had an amazing catch this past Saturday that has SportsCenter Top 10 of the year potential.

Red Hot Hanley: Ramirez Riding 10-Game Hitting Streak, Is He Back To His Pre-2015 Form? 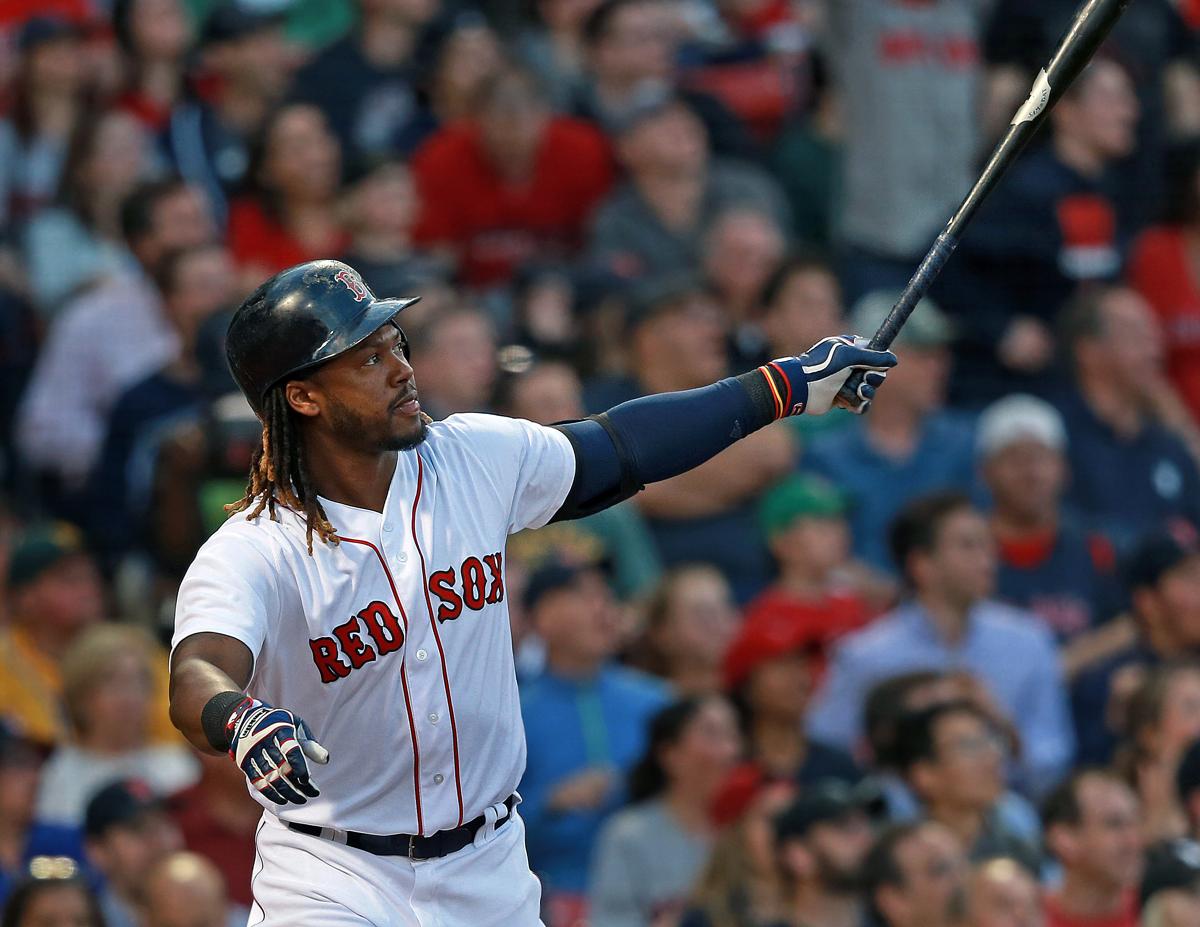 After going down with a wrist contusion on Thursday, some speculated that he would not keep this up when he returned.  But he was ready to go for Saturday’s game he quieted the doubters and hit a home run in his first at-bat.  If he keeps this up, he will remain an everyday starter on the Sox, something that was not a given to begin the season.  Do you think Hanley Ramirez is back to his pre-2015 form, or will he cool down?

Injury Update: Who’s Out, What To Expect

The Red Sox sustained lots of injuries this week.  Xander Bogaerts was placed on the DL April 8th after hurting his ankle when chasing a ball into the Rays dugout.  On Wednesday, David Price left the game but it looks like he won’t miss a start.  Bobby Poyner went down with a hamstring injury in the same game as Price and was placed on the DL.

Mookie Betts left Saturday’s game after suffering a foot contusion by colliding with Orioles catcher Chance Sisco while sliding into home.  He is now day to day, but he was out of the lineup Sunday.

The good news is that Drew Pomeranz will be returning this Thursday or Friday after a strong rehab start in Portland, giving up just 2 runs in 5 1/3 innings.  Relievers Steven Wright and Tyler Thornburg are also making progress in their rehab.

I do expect the Red Sox to stay hot but these injuries could eventually hold the team back, especially with a tough road trip including visits to Anaheim and Oakland coming up.  The A’s are led by power hitting out of veteran Khris Davis and breakout star Matt Chapman.  The Angels are led by two-way phenom Shohei Ohtani and star hitter Mike Trout.  They have a stacked lineup that has helped them get off to a hot start as they lead AL West.  The Sox will face Ohtani in Game 1 of the series because their game on Sunday was postponed.  Will the Red Sox be able to stay hot against these two teams despite injuries? 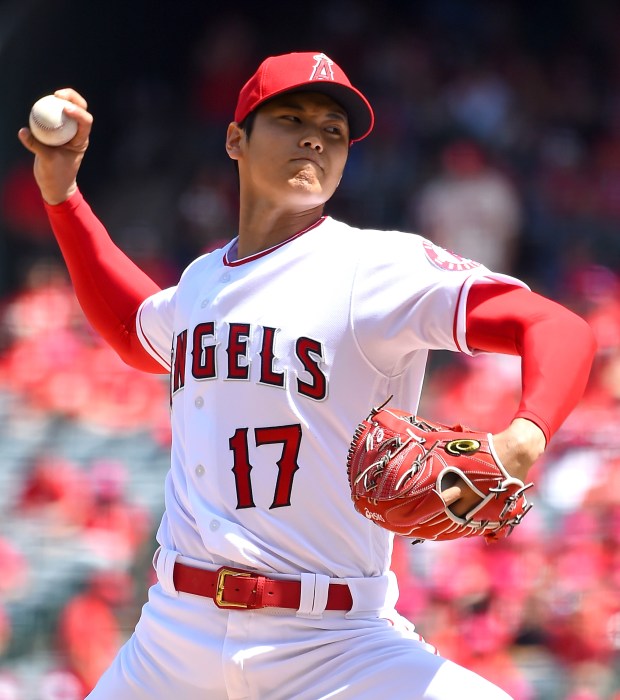 The Red Sox will head out west after their Marathon Monday game against Baltimore was rained out and the first game is against young Japanese phenom Shohei Ohtani.  He has dominated at the plate and on the mound, and he is the probable starter on Tuesday. Ohtani has become known as the HR-hitting ace.  He has hit 3 HR and is batting .367/.424/.767 in 8 games at the plate.  As a starting pitcher, he is 2-0 with a 2.08 ERA in 2 games on the mound.