With 8 minutes left in the game, the Pats were down by eight points, and I was losing hope.  I don’t know how they won.  They had a nice drive going, but Pats QB Tom Brady was sacked, and they were held to a field goal.  Then they took a 27-24 lead in a 2-minute drill by scoring a TD and a 2-point conversion.  But they left 1-minute for the Steelers.  They almost blew it.  On the first play with 52 seconds left, the Pats couldn’t get their hands on Steelers WR Juju Smith-Schuster on a short pass over the middle as he escaped tacklers and scurried down the field for 69 yards.  On the next play, TE Jesse James scored a TD on a pass up the middle diving into the end zone.  But video replay reversed the call.  2 plays later with no timeouts left and about 15 seconds left, Big Ben faked the spike and then tried to force a pass up the middle.  Eric Rowe deflected it right into the hands of Harmon, stunning the Steelers, and stealing the win

The Patriots won in comeback fashion in what was arguably the game of the year, as the Pats beat Pittsburgh 27-24.  You could argue that there was no tangible evidence to overturn the Steelers last-minute touchdown but the resilience the Pats showed leading up to the play, they deserved a call in their favor.  It all started on New England’s first drive.

QB Tom Brady and WR Brandin Cooks tried to set the tone early as Brady threw Cooks a 43-yard pass that brought the Patriots into the red zone within the first five minutes of the game.  RB Rex Burkhead ran in for the TD and the Pats took the early 7-0 lead.

But the Steelers weren’t about to let New England win easy.  Using the Patriots’ defensive weaknesses to their advantage, they marched down the field and responded with an 18 yard TD of their own, tying the game at 7.

The Steelers didn’t stop there.  In the next drive, their defense thrived, sacking Tom Brady and forcing them to punt.  Led by a 39-yard Martavis Bryant reception, they had another big drive following that.  But after Bryant’s nice catch, the Pats were at least able to hold Pittsburgh to a field goal.  It was now 10-7 Steelers as Chris Boswell made a 51-yard field goal.  But Steelers superstar WR Antonio Brown had hurt his calf, and he was taken to the hospital.

The Pats countered with another big play drive, this time a 31-yard catch by Pats TE Rob Gronkowski and the Pats were able to tie it up again at 10.   This was just one of two catches Gronk made in the 1st half, but he made a huge impact in the 2nd half.  But before the half, the Steelers were able to score 1 more TD, while also preventing a Patriots double score opportunity as their drive burned most of the 2nd quarter clock.  The Steelers clock-eating drives were led by star RB Le’Veon Bell, who dominated against the depleted Pats front seven.  They did not slow down even with Brown out of the game.  The Pats would get the ball in the 2nd half but would have to do so without RB Rex Burkhead who was knocked out of the game with a knee injury.

The Pats began the 2nd half with a strong drive as Brandin Cooks scored a touchdown after Gronk began to make a bigger impact.  But they missed the extra point which put them down by one 17-16.  After they shut the Steelers down, the Pats were ready to score again.  But Tom Brady was intercepted early in the drive.  Le’Veon Bell led the Steelers into the end zone quickly, and the Pats were now down by eight, 24-16.

As the 4th quarter began, the Steelers had the ball, and they began to eat up a lot of time as they tried to hold off the Patriots.  They held onto the ball for the first 7 minutes of the 4th quarter, leaving the Pats down by eight with just 8 minutes to come back.  In their first drive of the 4th quarter, they started off strong.  Gronk almost caught a 23-yard pass and the Steelers were penalized for clear pass interference.  However, Brady got sacked on third down after a pair of incompletions, and they were held to a field goal.

It wasn’t over though.  The Pats shut down the Steelers on the next drive with the only 3 and out for either team and got the ball back with a little over two minutes to go.  If they could successfully complete this 2-minute drill for a TD, they could secure a victory.  They marched down the field, as Gronk caught three straight passes for a total of 69 yards.  You could argue that his final catch was almost as good as WR Julian Edelman’s catch in Super Bowl LI.  Gronk just barely saved the ball before it hit the ground.

RB Dion Lewis ran it in for the touchdown, but New England scored too fast going 77 yards in 1:10.  They needed to go for the 2-point conversion to take a 3-point lead and at the very least hold Pittsburgh to a field goal and head into overtime.  Brady tossed it to Gronk for the conversion.  Gronk finished the 2nd half with 7 receptions for 135 yards, making a huge impact.  The Steelers had a little under a minute to respond.

The Steelers were confident that they could still win it, and Big Ben completed one 69-yard pass to WR JuJu Smith-Schuster.  As the Pats couldn’t get their hands on Smith-Schuster, the Steelers were able to do what the Pats did in three passes in just one big play.  The Steelers then scored with what was ruled a touchdown by TE Jesse James.  But the call was reversed, giving hope to all the Patriots fans out there, including me.  Two plays later, Big Ben tried to throw a TD again, but this time, he was picked off by Duron Harmon!  The Pats had done it again! 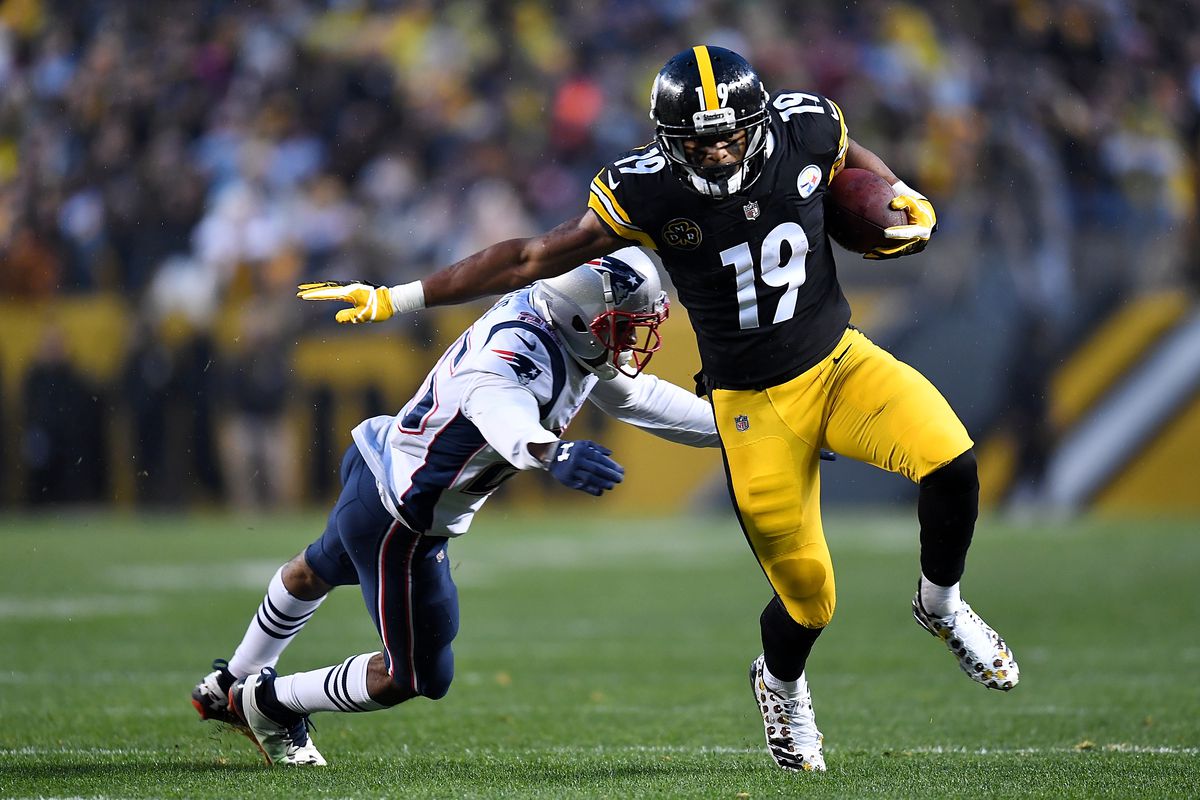 A couple minutes earlier, I had thought the Pats were done, and I was hoping they could hold on to the 3rd seed.  But now they lead the AFC after a stunning comeback victory.

There were two huge plays that secured the Pats their current #1 seed edge showing #1 seed confidence under tough road pressure in Pittsburgh.  Without the 2-point conversion, Pittsburgh would’ve likely won on a field goal after Smith-Schuster’s catch and run play.  The Pats held on with a great goal-line interception by Harmon.  The Pats lead the league in goal-line stops and today’s play was arguably the most clutch of the year.

This game reminded me of Super Bowl XLIX.  The Pats won in a comeback, a lot of points were scored late in the game, and the Pats secured victory with an interception after the opposing team almost scored.  The one major difference was the time left on the clock.  Super Bowl XLIX ended with a bad coaching decision, but in this game, Big Ben made the mistake forcing a pass instead of throwing it away to give his team a shot in overtime with a short field goal.

With this win, the Pats clinch the division and take the AFC lead.  They control their own destiny and will secure the #1 seed with 2 division wins at home.  Can they do it?