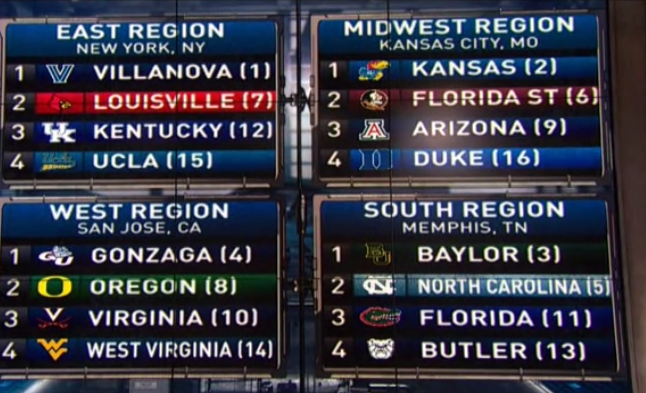 Yesterday on CBS, the March Madness bracket committee released their current Top 16, and divided them into the 4 regions.  Here’s what it looked like:

That’s how things are right now, but things can change.  That’s why I’m doing a bracketology, to show how the committee will change their opinion by March.

Villanova is having a great season, so they’ll stay on top in the East.  I moved Duke to the East, mainly because they deserve a number 2 seed.  They somehow find a way to do it every year.  Then since I have Kentucky, UCLA and Louisville in other regions, I moved Virginia and West Virginia into the 3 and 4.  These are trustworthy teams that should keep their position seed-wise.

Michigan State is an intriguing sleeper, so are many of the teams in the East such as California, Maryland, Michigan and VCU.  However, the top 4 are pretty good, and I don’t know if these teams will be able to beat them to advance to the Final Four.

Kansas will stay on top as they are by far one of the best in NCAA Basketball.  Louisville comes in at Number 2 because they could be a huge sleeper to win the championship.  Wisconsin and Notre Dame have also had really good seeds, and I think the selection committee will give each of them a second look when making the final rankings.  Wisconsin has a good schedule ahead of them, and Notre Dame has at least been good enough for a low end 4 or 5 seed.

There are a lot of good teams in this region.  Butler is a snub for a higher seed, and there are plenty of other talented teams in the region.  Valparaiso is one team that didn’t make March Madness last year, but has had a much better season in 2016-17 and could thrive in this year’s tournament.  Northwestern, Xavier and Indiana have also looked pretty good.  If someone can beat Kansas, it could be anyone moving on to the Final Four.

I think North Carolina has a really good season ahead of them and will take over the Number 1 seed.  They will be hard to beat, but Kentucky will also be a contender as they move up to the 2 seed.  Florida State and Arizona will stay in the Top 16 overall, but the success they’ve had this season won’t continue, and they were a little overrated in the Bracket Preview.

After shocking Michigan State in the 2016 first round, Middle Tennessee could be a sleeper to go pretty far.  This region will also boast some of the better high seeds.  Florida, Cincinnati and Dayton could be tough competitors for teams like Florida State and Arizona.  This region is really anybody’s to win, but North Carolina is looking like the favorite.

Gonzaga is undefeated and should stay on top unless disaster occurs.  I think Baylor may fall a little bit but they get the Number 2 here easily.  I also think UCLA will move up to the Number 3.  You can’t underestimate a good season from the all time leaders in national championships.  They will bounce back from missing last year’s tourney.  With all these teams rising, Oregon will lose a little steam, but they will still be in the Top 4 of the West.

I’m surprised Creighton wasn’t in the Top 16.  Creighton has had a great come back season and will get a Top 5 seed.  Remember when Wichita State was good?  I sure do, and they may show some of that if they can make their way to the Sweet 16. However, they would play New Mexico State, who i value as a big sleeper to go far as well.  The Shockers were in a similar case in last year’s match-up against Arizona, but shocked them like they used to do, and went to the Round of 32.  This could be the place where a lot of upsets happen.

So, there you have it.  After Selection Sunday, be on the lookout for my March Madness preview.  It will take a look at some of the best potential and set match-ups.