Last week again was a 9 win week, but we can turn it around. I’m still comparable to the experts. 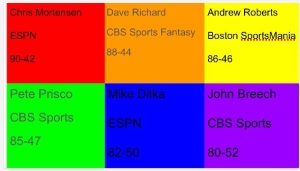 Despite having Big Ben hurt, Johnny Manziel is not going to get another win. The Steelers defense is too good. Isaiah Crowell and Duke Johnson are against enough quality defense to have two defenders a piece. The passing game is stuck with just disappointing veteran Dwayne Bowe. Bowe was the starter in Kansas City and was going to be here but he lost his job to Brian Hartline and Travis Benjamin. Gary Barnidge and Hartline will be guarded accordingly. Well, maybe Benjamin will be open.

But the Steelers have plenty of passing options despite a worn down running game. With Joe Haden out, Antonio Brown will be joined by Martavis Bryant and Heath Miller. So, that should be enough to beat out the Browns.
Notable Locks: Panthers over Titans, Saints over Redskins

Upset Of The Week

Unfortunately, I don’t have an upset this week. If you want more game analysis, Check out my fantasy guide. It’s also a form of preview.

What team is this? Guess in comments.