A shortened version of this article was recently published in The Ithacan. Check out the full version below.

Josh Vorensky ’11 earned an Emmy for his work as an associate producer for a segment on ESPNews along with three other Ithaca College alumni. (Photo via Josh Vorensky)

For many individuals wanting to break into the sports media realm, the dream is to work with the worldwide leader in sports and be recognized for their work. Josh Vorensky ’11 has already reached the pinnacle of the sports media mountain.

Before ESPN, Vorensky had internships with New Jersey Networks, MTV and NBC during the 2010 Winter Olympics. Now, he works as an associate producer and feature producer at ESPN, creating features for shows and programs. In 2020, Vorensky was a part of the production team that won an Emmy for Outstanding Sports News/Feature Anthology for the Sports Center (SC) Featured segment that aired on ESPNews. As a feature producer, Vorensky tells the story of athletes as part of the Sunday and Monday NFL Countdown broadcasts.

I spoke with Vorensky about his experience at ESPN and his career as a producer.

Andrew Roberts: What are some of the things you always do before a production?

Josh Vorensky: Before production day you always have to have a location and crew picked out; you need to know what your story is about and how that location kind of fits what your story’s going to be. Let’s say it’s a story about an artist. You’d want to be in some kind of art studio-esque place, so you’d want to nail down the location. You’d also want to nail down the crew; you want to know what kind of cameras, the specs of what you want to shoot. So there’s basically a checklist of what you want to have before each shoot. You need to have your crew picked out, your location picked out and if you’re doing an interview, your subject as well. A lot of times you’ll have to do some pre-interviewing, get to know the person and kind of know what you’re going into.

AR: How do you organize your production information?

JV: I have to write everything down. I learn better that way and that’s what I usually do. I do things on call sheets (example pictured below) that keep everything organized, especially a shot sheet if it’s kind of a new crew. If it’s crews that I trust, I give general guidelines of what I want. As I’ve gotten older, I’ve kind of figured out the kind of shots I want. When you’re shooting these shots you just shoot what you need but always keep in mind the sequence of what is necessary. 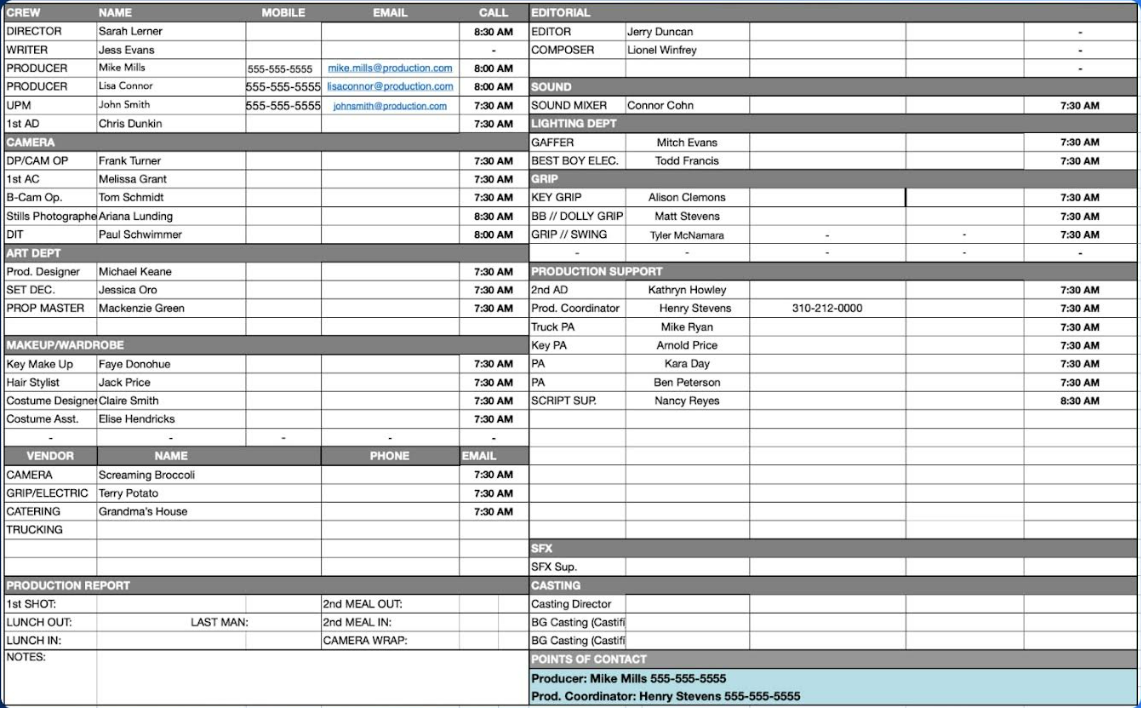 AR: Do you have standard protocols for what you pack when you travel? How many days a month do you travel?

JV: I have a general backpack; I keep a toiletry kit in my backpack. I’ve been traveling a little bit less; it kind of ebbs and flows. One time I’ll travel twice in a week and then I just had a shoot today where I was remote producing. That’s kind of a benefit of the pandemic where you don’t have to travel for every shoot, which provides a better work-life balance.

JV: I usually like to get started early depending on what the shoot is and when the subject is available. It’s usually somewhere north of an hour and a half for setup time and then whatever the interview is. During our office time, I’m editing, coming home with ideas and kind of getting everything ready. I’ve been in features formally for at least five to six years; my role at ESPN has kind of changed over time. I started as a project-based production assistant where I was doing things like highlights, rundown and prompter. As I got more experienced, I was working on “Outside the Lines” and doing these things called wraps. When I got promoted, I worked at “Baseball Tonight,” SCEU, which is the SportsCenter Enhancement Unit, and did some writing. Now this is going to be my fifth or sixth season doing features for Sunday and Monday NFL Countdown.

AR: What exactly do feature producers do?

JV: You do documentaries on athletes; you’re a storyteller, producer and documentarian. You help to create content for the network, and it’s a joy to do. There’s nothing I enjoy more than seeing the impact the stories had on a wider public. That’s generally what I do; we pitch stuff all the time, I send ideas every week and help to complement our program and broadcast.

AR: What kinds of classes and extracurriculars would you recommend for someone who wants to be a feature producer?

JV: I took some screenwriting classes. I would say learning how to craft stories and craft news elements is very important. Volunteering for “Newswatch” helps, I think that knowing how to edit helps, knowing how to shoot helps and pitching as many ideas as you can, things that are new and creative. Especially in college, you have so much available time to do all this really cool stuff, and I’d just try to push yourself creatively and get a reel together.

AR: What qualities must you possess to be a successful producer?

JV: I think you have to be able to think creatively, be very diligent, but also be able to take a step back, take a few breaths and look at the bigger picture. It’s very easy to walk into an environment and want to shoot everything, but you have to think about what you need for your story. When I was younger, I wanted to get as much b-roll as possible, but how does that fit within the wider story? I think overall, you have to be organized, willing to think creatively, focused, and calm.

AR: What would you recommend for college students interested in production to do outside of classes and extracurriculars?

JV: Outside of the TV extracurriculars, I would say get yourself into other hobbies. I’m in an orchestra out of work. I like to run. I try to keep myself as well-rounded as possible. It’s nice to step away sometimes. If you find other clubs outside of TV, feel free to join. Personally, I was involved in Hillel during my time at Ithaca.

AR: Is there a typical career path for producers?

JV: I don’t think there is. I think people have gotten here in a number of different ways. Some people have interned here, others have shadowed here. I would get some real world experience if you can and be ready to learn.

AR: What do you like most and least about your job now?

JV: I love my job. I think it’s awesome. I love being able to tell stories and meet people; I find it incredibly gratifying being able to create some cool stories and push myself creatively. I do enjoy traveling. I don’t know if there’s a worst thing, honestly.

AR: If you could talk to your college self, what would you say to them?

JV: I would say to take a step back sometimes and not overload myself. I loved Ithaca; I did find there was a lot of competitiveness, especially in the Park School. That was good; it made everybody better. I think the most important thing to know is to focus on yourself and how to make yourself better. Don’t look at what other people are doing. I found myself doing that a lot. When I took a step back, just enjoyed myself and made my own TV show, I think I was a lot less stressed, I became more confident and I definitely prepared myself to be in the career that I am in. So focus on yourself, don’t worry about other people, take inspiration from them but don’t feel like ‘I wish I could do X like them’. Just be yourself, just do it. Create your own path. What I loved about Ithaca is that even though I was involved in sports, I did way more than sports. I didn’t isolate myself into just doing sports. I think my first two years, I was way too concerned with what other people were doing. Once I just enjoyed what I was doing and charted a path for myself, it made everything a lot easier and more fun.

My Take on spending time with Josh

Overall, feature production is not an easy job. It requires a high level of creativity and requires some technical skills. However, Vorensky really enjoys it, and it can be a fun job for many others too. Those interested have great opportunities to gain a wide variety of experience at Ithaca through ICTV as well as classes in areas like TV production, journalism and documentary studies. If you focus on yourself and carve your own path, you have a high chance of success in the industry.