The WooSox were set to play two games on Sunday, July 18. Saturday night’s game had been postponed after just over an inning, and was scheduled to resume at 12:05 on Sunday followed by Sunday’s regularly scheduled game, which would be reduced a to 7 inning game.

Sunday was also Advocates Day as a group from Advocates, a non-profit organization that supports people with disabilities like me, was in attendance. The game was originally set to start at 1PM but with two games being played, the start time was moved up an hour.

Despite the change of plans, Advocates Day went forward. I was invited to join Advocates, and they collaborated with the WooSox so I could have special press credentials to report on the happenings of the day around most areas of the ballpark.

I started out on Polar Park’s Hanover Deck, a great viewing area high up in right field with views of the field and the city of Worcester. I spoke with Diane Gould, President of Advocates:

Advocates, like the Doug Flutie Jr. Foundation for Autism, continues to help individuals like me. Meeting with Diane, a big sports fan, was a great start to the day despite the overcast skies and expected rain. I was given the opportunity to report on all the action so I watched the continuation of the first game from the Hanover Deck, and did some play by play of my own with my dad serving as my personal cameraman:

Rain began to fall during the 5th inning, so after 5 scoreless innings combined for the first game carried over from Saturday, the WooSox grounds crew brought the tarp out for another rain delay.

Despite the rain delay, there was plenty to enjoy at this brand new ballpark. Behind home plate in the upper level is where the press box and broadcast booth are located. The WooSox provided me special access to the DCU Club which is adjacent to both. It’s a huge premium area with couches and other special seating areas where you can avoid the elements outside but still watch the game. 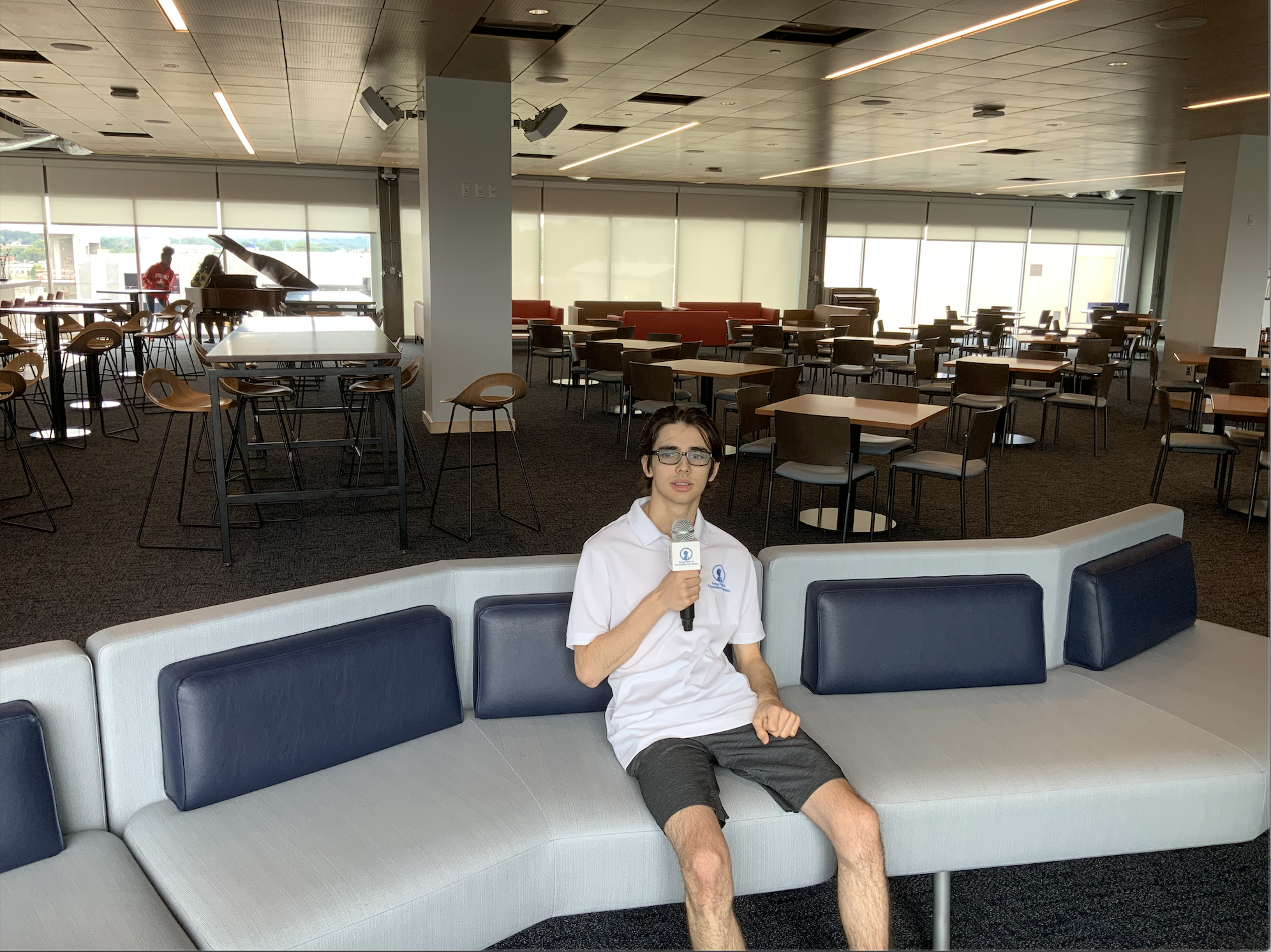 In the DCU Club, I ran into WooSox broadcaster Mike Antonellis, who I had met at the open house on July 10. He was very generous with his time and gave me the chance to speak with him for a spontaneous rain delay report:

I also had the chance to stop by the press box, which was full during the game but had space during the delay. In the press box I met Cassandra Riley, a graduate of my current high school (Algonquin Regional High School) who is now a WooSox photographer. She had always been interested in photography and baseball, so this was a dream job for her. It turns out that Cassandra’s mom, Patricia Riley, is a teacher at Algonquin who has been a big supporter of my career aspirations and has gone above and beyond for me during my time at Algonquin. It was a pleasant surprise to meet Cassandra because I did not know she worked at the WooSox and we had a lot in common to discuss:

The day was also the first Bark in the Park day at Polar Park, where fans were allowed to bring their dogs to the stadium. The remainder of the games scheduled for the day were eventually called off due to the on and off rain (game 2 was rescheduled to August 19 as another Bark in the Park day), but the WooSox did an excellent job keeping fans (employees too) and their dogs engaged, allowing them onto the field to walk the warning track after the game was called:

Despite weather complications, it was a fun day at the ballpark thanks to Advocates and the WooSox staff. While I wish I could have watched more baseball, the rain delay opened the door for opportunities I may not have had at a typical WooSox game. In addition, even though there wasn’t much action on the field, it’s really exciting watching players like Jeter Downs and Marcus Wilson who could be playing for the Red Sox at Fenway some day, maybe even in September when major league roster sizes are expanded. I’ve been invited to return to Polar Park again as a reporter on July 31 for Autism Acceptance Night and I can’t wait.