Welcome to Part 6 of my NFL Draft Report Cards.  Last week, I reviewed the home division of my New England Patriots, the AFC East.  Though the Pats should win the division, the Jets outdid them in the draft.  But in my eyes, an AFC North team was the overall draft winner.  Which team is it?  Keep reading to see my Draft Report Card for each team, including a grade for each pick as well as my final grades.  As I post more articles, I will also include links to the rest of my draft grades.

I feel the Browns won this year’s draft. Not only did they snag two major steals at positions of need in Greedy Williams and Mack Wilson, they also filled most of the rest of their biggest needs. In addition to Williams, a CB and Wilson, an ILB, the Browns drafted a tackle, a safety, an outside linebacker. Some of their other picks were slight reaches, but they filled most of their needs, so I really like this draft class.

The Ravens started off this draft historically strong. They grabbed their two WRs of the future (hopefully Lamar Jackson is able to throw to them). They also drafted a much needed edge rusher in Jaylon Ferguson, who happens to be a great fit. The later rounds didn’t go as well. They did make some decent picks later on. I understand the selections of RB Justice Hill and DT Daylon Mack. But the Ravens didn’t need another guard or corner, and the Ravens been fine with Robert Griffin III as Jackson’s sole backup. Overall, this is a pretty good draft class, but it was a bit top heavy, and they didn’t prioritize their biggest needs in the later rounds. 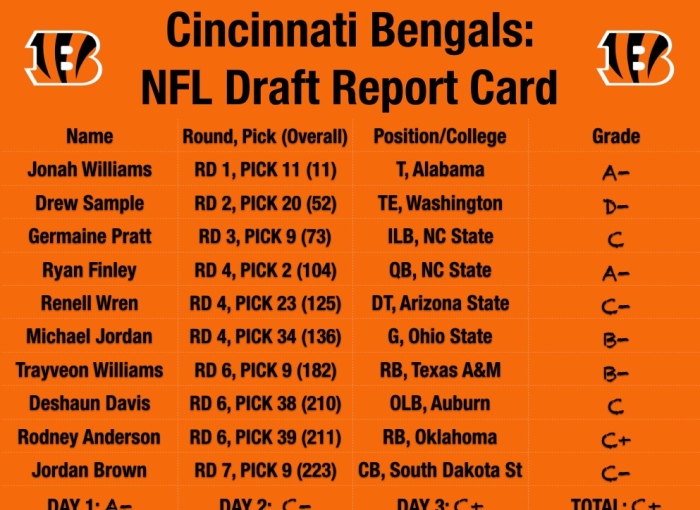 The Bengals made a couple great selections. They found their potential QB-LT duo of the future. The Bengals also filled all of their biggest needs. But they reached on a lot of their picks. I’m not going to make a big deal about their choice to put aside smaller needs in favor of prospects they liked. But Drew Sample, for example could’ve been found in the 4th or 5th. He isn’t 2nd round material. I do give them credit for the promptness on filling their needs though, so I didn’t mind this draft class too much.

My favorite pick by far from this draft class was the selection of RB Benny Snell Jr.  Snell can be the primary backup for James Conner with Le’Veon Bell leaving for good. But other than that, the Steelers didn’t have an amazing draft. They didn’t fill too many needs, and the needs they did fill were filled by reaching. I didn’t mind the Devin Bush pick, as he may not be a good fit, but he can play inside linebacker as they need. Plus, Isaiah Buggs was a steal even though Pittsburgh doesn’t need a DT.  But the fact that they didn’t draft a tackle to replace Marcus Gilbert will significantly bog them down.

That’s all for this portion of my NFL Draft Grades.  Stay tuned for my AFC South Draft Grades next.  As a whole, the AFC South did not have a great draft.  But two teams tied for the worst overall grade.  Who were they?  Find out soon.