Welcome to the second article of my 2019 NFL free agency prediction series!  Today, I’ll be sharing my predictions for where the best linemen, offensive and defensive, end up signing.  Will Trey Flowers return to New England, and will he get the kind of money he was expecting?  Where will Ndamukong Suh be headed next?  Keep reading to find out what I think, and you check out my tentative schedule for the entire series below.  In later articles, I will include links to the previously posted articles:

With Marcus Gilbert leaving Pittsburgh, the Steelers will at least need to sign another tackle. If Alejandro Villanueva replaces Gilbert at left tackle, Smith can play right tackle for Pittsburgh. Newton hasn’t played in a long time, but if he can prove that he’s healthy, he should be able to score a 1 year deal; I think the Bears should be interested. I have James and Ogbuehi returning to their 2018 teams, but the Panthers no longer need Clark, and the Patriots should be fine without Brown (update Brown will sign with the Raiders for 4 years/$66 M) as long as last year’s 1st round pick Isiah Wynn can stay healthy. The Broncos could always use another tackle, and the Chargers will seek out a replacement for Joe Barksdale. 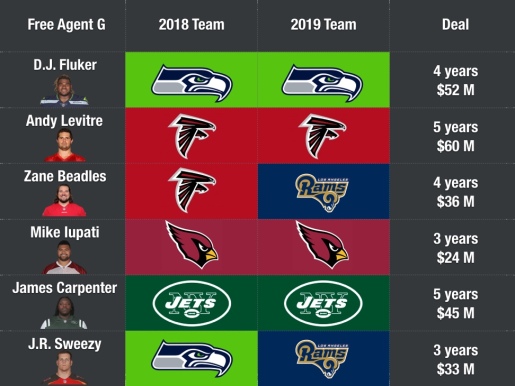 Not a lot of movement here. Pete Carroll reportedly wants Fluker back, and Levitre was a good fit in Atlanta. The Jets should definitely bring Carpenter back, and the Cardinals could use any o-line help they can get their hands on. Acquiring Marcus Gilbert helped matters, but re-signing Iupati will provide them even more secuirty. With Fluker and Levitre returning to their 2018 teams, Beadles and Sweezy will have to find new homes. With Rodger Saffold leaving, maybe the Rams could add both of them, further enhancing an above average offensive line.

It’s time for the Chiefs to move on from Morse; I have him going to Washington, who will also bring back Luke Bowanko for depth at center and guard. Paradis, another top free agent center, will leave Denver and head to Jacksonville, who just needs a new center to top off a strong offensive line and protect newly acquired Super Bowl LI hero QB Nick Foles. In Jacksonville, Brandon Linder can take over for Omameh and Cann at guard, who will head to Green Bay (in need of a guard after Josh Sitton and Lang’s departures) and Kansas City, respectively. Miller will head to Oakland, playing along with Kelechi Osemele.

Ansah was not franchise tagged by the Lions this time around, but I do think he will wind up with the Lions, and despite a lengthy injury history, I see him scoring the biggest deal of any defensive lineman.  The Lions should still draft or sign other TEs and D-lineman behind Tyler Eifert and Ansah, who are both injury prone.  Meanwhile, look for Johnson to score a bigger deal this off-season as he finds more money outside of Cincinnati.  Oakland should be interested in adding someone to play along with Arden Key.  Wilkerson should also score a pretty hefty deal, as the Panthers add him to replace Julius Peppers.

Wake appears to be leaving the Dolphins, but he wants to play, and he’s still elite talent at 37.  Look for the Giants to add him with a 1 or 2 year deal after trading Olivier Vernon.  Fowler and Long will also receive multi-year deals, as Fowler heads to Tennessee to supplement a young front seven, and Long heads to Miami as a discount replacement for Wake. 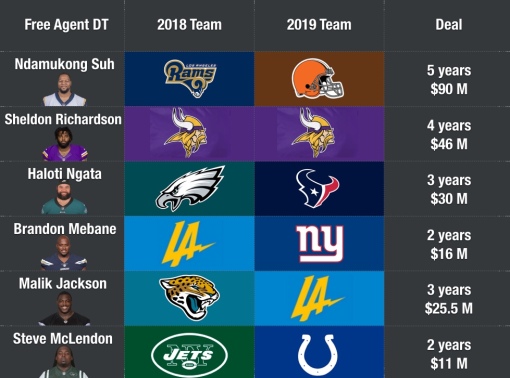 Suh has been linked to the Browns, and it’s a perfect fit.  They could use an upgrade over either of their current DT starters. Suh may be considered a dirty player but adding a veteran to this young defense could help with their development.  Richardson, on the other hand will return to the Vikings, helping them maintain one of the best D-lines in the league.  Ngata will head to Houston, who may be set at defensive end, but has needed a DT since Vince Wilfork retired two years ago.

Mebane will head to New York after three years on the Chargers to replace Damon Harrison (traded mid-season in 2018).  Jackson, who was just released by Jacksonville, will replace Mebane in LA.  McLendon will head to Indy, providing an upgrade over most of their current D-linemen. 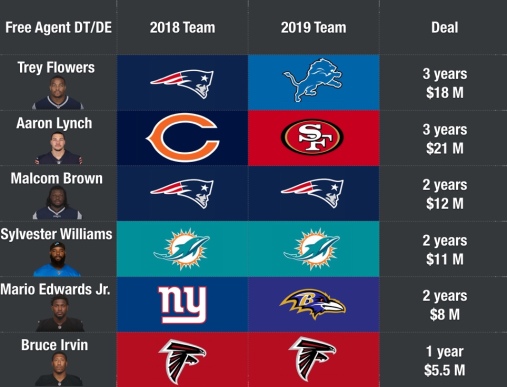 Everyone thinks Flowers will sign some mega-deal with the Lions after a big year in 2018. I don’t think so.  He’ll score a multi-year deal, but no more than $10 million annually with the Lions (update, I was off on the dollars by a lot as Flowers will sign with the Lions for 5 years/$80 M).  You would think the Pats would try and retain him but after the Michael Bennett trade, it’s unlikely.  He’ll head to Detroit, playing along with Ansah.  Brown, Williams, and Irvin will return to their 2018 teams.  Lynch will head back to San Fran where he started his career, providing depth for their front seven.  Look for the Ravens to seek out depth as well and sign Edwards.