Welcome to Part 2 of my 2nd annual MLB free agency predictions.  Last off-season, things took a long time to get going due to a relatively dull free agent market.  This year, that is not the case.  We might have the best MLB free agent class in the history of my blog, and it’s bound to get going any minute now.  That’s why I’m releasing my predictions in November and December this year rather than January.  I wanted to get these out before the Winter Meetings, where a lot of big moves could occur.

Today, I will be sharing my predictions for free agent catchers and infielders, including Wilson Ramos, Josh Donaldson, and Manny Machado.  Feel free to comment with your thoughts.

Below is my tentative schedule for my 2018-19 MLB free agency coverage. 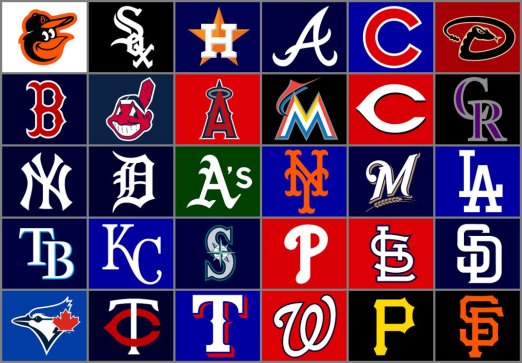 Note: These predictions were made before Atlanta’s signings of Josh Donaldson and Brian McCann on November 26. 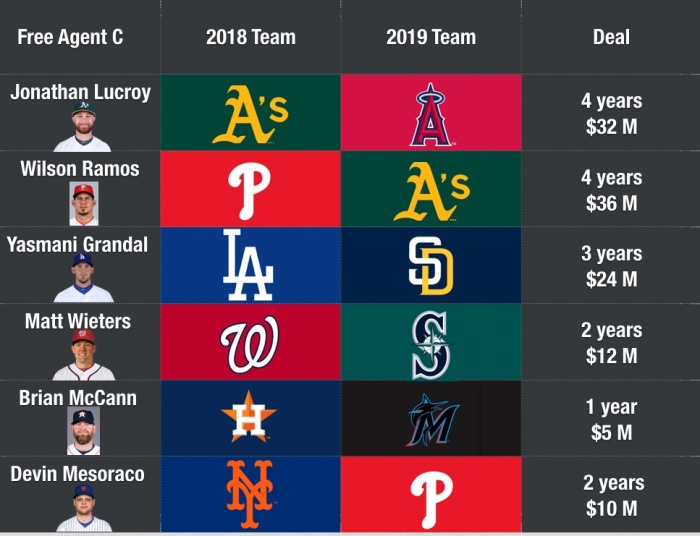 The Nationals signed C Kurt Suzuki this week, and the Mariners dealt off C Mike Zunino to Tampa Bay. That should cause the catcher market to keep moving quickly. The Angels need a catcher upgrade desperately. They will be in the market for top options Wilson Ramos and Jonathan Lucroy. The A’s will also look for a catcher after losing Lucroy. I could see them adding Ramos. I have Grandal returning to the Padres, where his career started. He will split time with C Austin Hedges. Wieters will head to Seattle. The Mariners are looking for a cheap option at catcher to support C David Freitas. I have the Marlins signing McCann after trading C J.T. Realmuto (I think he’s going to either Atlanta or Milwaukee). That leaves Devin Mesoraco, who will sign with the Phillies and split time with C Jorge Alfaro. The Mets will miss out in the catcher market and stick with Travis d’Arnaud at catcher.

Corner Infielders (Combined 1B and 3B due to shortage of options) 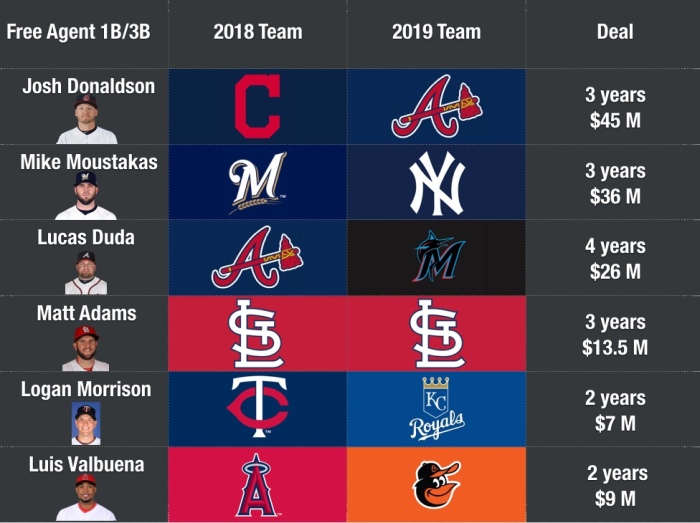 The Braves’ biggest hole is at third base. They are doing whatever it takes to add a top line third baseman to help their contention efforts. Donaldson is a great fit. I think the Yankees will pass on Manny Machado and use Didi Gregorius in the long term. But they will add 3B Mike Moustakas to give them flexibility in the infield, whether Gregorius is hurt or not.

The Marlins are looking for a cheap replacement for Justin Bour, and Duda is a strong fit. That will cause Matt Adams to return to St. Louis, and the Royals will add Logan Morrison with Duda signed. The Orioles do need free agent help, but they will look for bargains. Valbuena could be a good bargain signing. He can provide support at second and third. 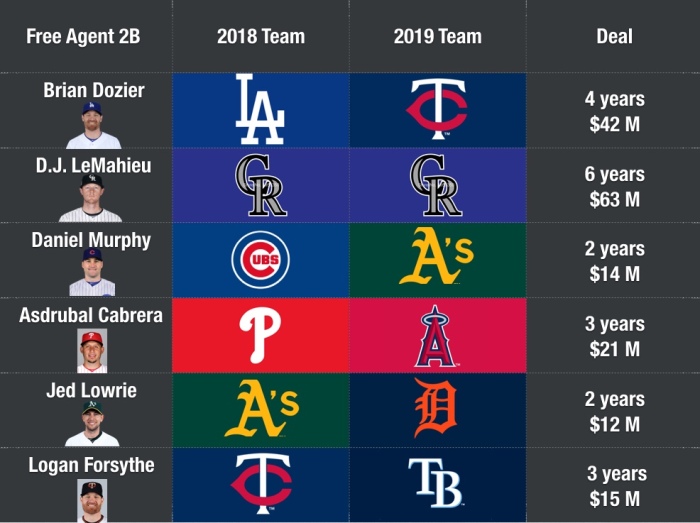 The Twins are in it to win it, and reuniting with Dozier after a deadline deal will help fill one of their biggest holes: middle infield.  They may need a shortstop next to Dozier.  I also have LeMahieu returning to Colorado.  If the Rockies part ways with LeMahieu, they may have a hard time finding a replacement.  They definitely need a second baseman, and LeMahieu is the best fit.  I have Murphy heading to the A’s, who will be able to afford him.  It was a down year for Murphy, and it could make for a bargain signing for a small market team with a hole at second like Oakland.  That leaves Asdrubal Cabrera, Jed Lowrie, and Logan Forsythe as the top 2B options remaining.  The Angels will sign Cabrera as an upgrade over Ian Kinsler.  Lowrie and Forsythe could be afforded by rebuilding/small market teams like the Tigers and Rays.  The Tigers desperately need middle infield help.  They will look for bargains as they find their free agents. 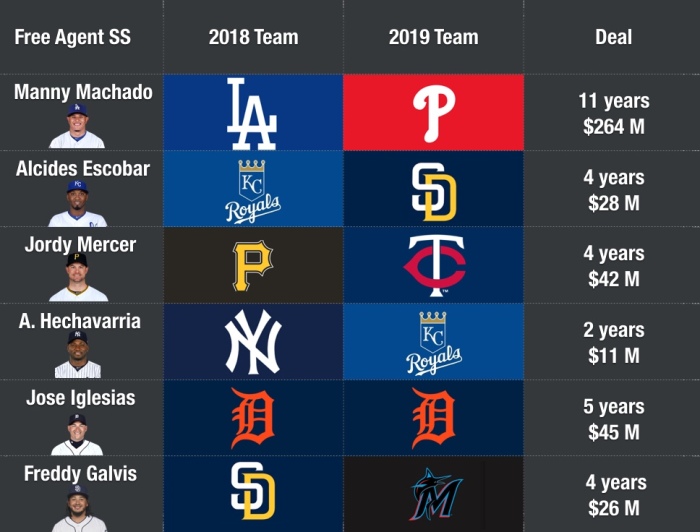 Whoever signs Machado will need to offer a lot, and the Phillies have enough to sign Machado with money to spare for Mike Trout or another big free agent in a couple years.  The Phillies are ready to make the jump to contention, and Machado plus some cheaper free agents might be enough to do it.  The Twins will add Mercer to support Dozier, and Alcides Escobar will go to the Padres, who will seek veterans as insurance for their younger players.  That leaves guys like Adeiny Hechavarria, Jose Iglesias, and Freddy Galvis for rebuilding teams.  I have the Royals adding Hechavarria as another infield option, the Tigers reuniting with Iglesias, and the Marlins adding Galvis to support the young J.T. Riddle.

That’s all for today’s predictions.  Stay tuned for Part 3, where I will predict where the top outfielders and designated hitters sign.  I will also add some ideas for trades.  Unlike others, I do not have many big stars being traded, but I could see some smaller trades occuring.