Welcome to my Week 11 NFL Picks and Previews.  Last week was a rough week for me. I went 6-8, putting my overall record at 81-65-2 (81-66-2 including TNF Week 11).  I am still ahead of 1 expert from ESPN and 1 from CBS Sports. I’m expecting a low scoring week this week. The top defenses in the league will thrive, and after an offense-heavy year, defense really will win some games.  Which defense first teams will prosper? Which will fall short due to a regressing offensive scheme? Comment with your thoughts, and keep reading to find out what I think. 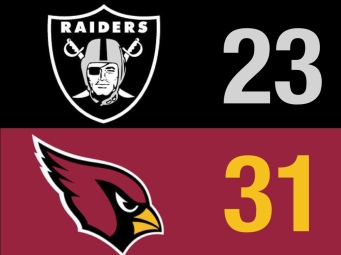 Both these teams have struggled regressively this season.  At the start of the year, I had projected this to be an exciting match-up between two contenders.  That is not the case, as these two teams have only combined to beat two other teams this year: the Browns and the 49ers (twice).  I cannot see Oakland winning in Arizona. They are now without Marshawn Lynch (injury), Amari Cooper (trade), and Khalil Mack (trade).  QB Josh Rosen and the Cardinals will win triumphantly on home turf. They may be in the basement of the league, but they will touch the ceiling of that basement with 3 wins against other bottom of the barrel teams.

Upset of the Week (SNF)

This won’t be Minnesota’s best offensive game as the Bears hold them back quite a bit.  But the Vikes defense should be at its best in Chicago, overwhelming rookie QB Mitch Trubisky and his young offense.  The Bears run defense will succeed here, but the secondary may struggle against Minnesota’s deep group of receivers. This will allow the Vikings to pull the upset in Chicago and take the NFC North lead.