This year, I am starting high school at the Algonquin Regional High School,  and I am going to be covering school sports including football.  I plan on contributing to the school newspaper (the Harbinger), sometimes publishing my newspaper articles on my blog.  I also plan to learn a lot from the Northborough Cable Access TV station (NCAT), which is headquartered at the high school.

This summer, I started working with the varsity football head coach, Taylor Allen, on video coverage of the football team, starting with a “Hard Knocks” style series on the team and eventually gameday coverage.  We have decided to call it Gonk Knocks (Gonk being short for Algonquin).  Below is Episode 1, along with my voiceover recap of the first day of football activity at Algonquin, August 17th.  Since this is the series premiere, I have decided to release two episodes at once.  Click here for Episode 2. 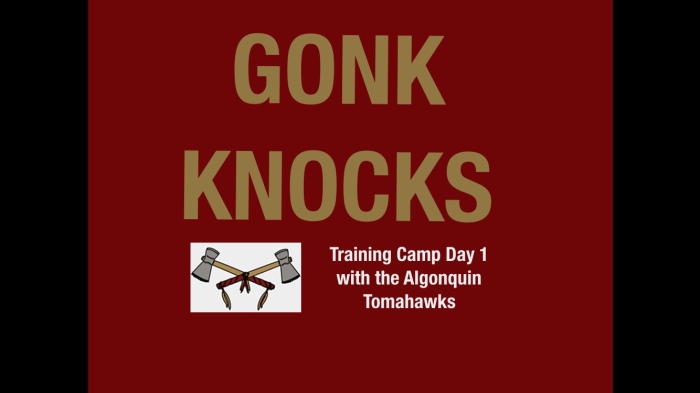 Note: This episode exceeded the free YouTube limit of 15 minutes, so it has been split into 2 parts.

The Algonquin Tomahawks are the football team for my school, the Algonquin Regional High School of Northborough and Southborough, Massachusetts.

After a long summer, football is finally back, and for the T-Hawks, it all started today, August 17.

Today’s practice focused on fundamentals, conditioning, and cadence, skills that will be practiced in individual drills, 11 on 11 drills, and a unique running drill.

Last year was challenging for the T-Hawks, but head coach Taylor Allen and his brother and assistant head coach, Mark Allen, are optimistic that this year will be a good year.  The coaching staff has noticed a new dynamic in the locker room and plenty of enthusiasm from the players.  They have also implemented a new defense and made several other changes that they hope will make a difference.

The Allen brothers like to think of this year’s team as one big family, as their coaching staff is made up of guys that all know each other well.   Head Coach Allen said at the parent-player info night, it’s all about the players having fun.  He will hold the players to high standards but during this preseason he also wants them to build friendships and support each other.

This year the T-Hawks have a new motto that is written on the back of their practice jerseys, “Burn the Boats”.

It all originated from the story of Spanish explorer and conquerer Hernan Cortes.

The T-Hawks set the expectations for their players by presenting offensive and defensive goals to shoot for.  After the meeting, the team was ready to get working.

The practice was scheduled to be held outside, but due to passing thunderstorms, they brought the team into the gym midway through practice.  They still had plenty of work to do, and had an indoor plan knowing that the weather might not hold up.

Outside, they had worked on individual and positional drills.  But once the team made their way inside, they began to practice their new playbook and cadence in 11 on 11 drills.

While it wasn’t perfect … it was a good day and the team accomplished a lot.

The 1st day had a focus on fundamentals.

This was only the first day of practice.  The team did not even have their pads on. Yet this first practice was far from easy.  The entire team put in a tremendous effort, and on Day 1, the coaching staff was already working the team hard setting the bar high for days to come.

On top of the hard work in 11 on 11 Drills, the players had to run up and down the gym at the end of practice while practicing their cadence and formation.

One major goal for the team this year was avoiding mental mistakes.

The team did see improvement, but Coach Allen made the whole team drop down for push-ups after a mental mistake during the running drills, sticking with the “Burn the Boats” philosophy.

After practice, the coaches had a few more things to say.

I had the chance to speak with a couple of the captains (check out the interviews in the video above).

One thought on “Gonk Knocks S1 E1 – Burn the Boats”