Welcome to my first NFL Draft Report Card article of 2018.  I have given a grade to every pick of the 2018 NFL Draft and compiled the grades onto 32 report cards, one per team.  I averaged all the grades on each team to determine my final grade for each team’s NFL Draft.  To avoid overly long articles, I have split it into eight parts, one for each NFL division.  Let’s start with the AFC East, the home of the New England Patriots. 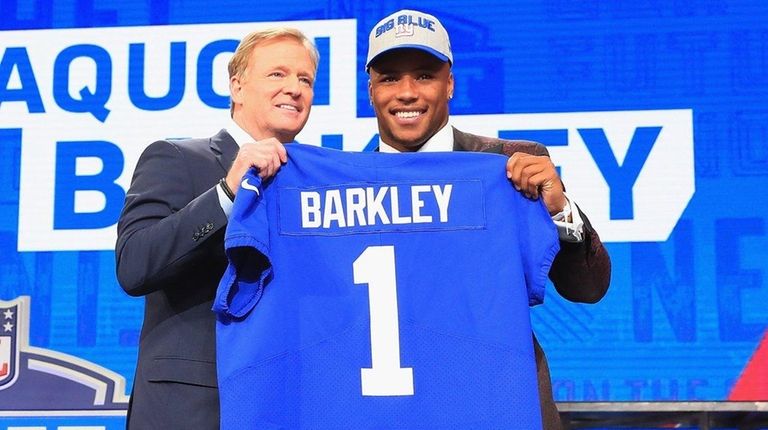 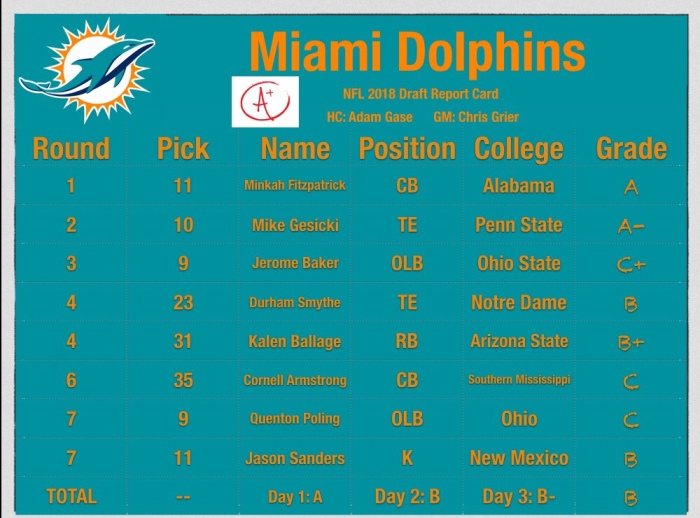 What They Did Right: The Dolphins started off the draft on a strong note.  Rather than trading up for a QB of the future that they do not need quite yet, they took Minkah Fitzpatrick, a versatile defensive back who fits well into a Dolphins secondary that needs significant help.  This was a big steal by the Dolphins, and it’s not the first time they have done this.  They took T Laremy Tunsil, originally the projected No. 1 pick after he slid in the 2016 NFL Draft.  They also did a good job filling their needs early on, taking a strong pair of tight ends, a defensive back, a young RB, and a linebacker.

What They Did Wrong: They made some reaches in the later rounds, and they took a second linebacker, TE, and cornerback when they could have used some offensive line help.  But there are no fatal flaws here.  The Dolphins arguably had the best draft in the AFC East. 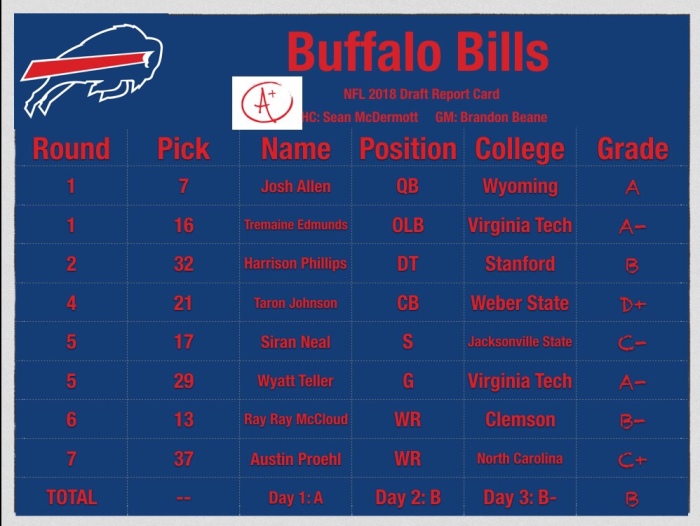 What They Did Right: The Bills had a spectacular Day 1.  They took two grade-A prospects in Round 1, making smart trades to put themselves in position to get what they needed.  Josh Allen has very high potential, and he will definitely compete for the starting job.  Tremaine Edmunds brings much-needed help to the linebacking corps on the outside and on the inside.  They got a steal in Edmunds with the 16th pick. They also had two other quality steals. They took DT Harrison Phillips after he nearly fell to Round 3.  They do not really need a DT, but Phillips was a valuable pick for the Bills at this point in the draft.  They also scored a steal in G Wyatt Teller. Not only was Teller projected to be drafted much earlier, but he fills the hole that Richie Incognito left behind.  Teller has the chance to compete for a starting job and thrive in one across from fellow Bills linemen John Miller and Vladimir Ducasse. They topped off their strong draft with a couple of good wide receivers in the late rounds.

What They Did Wrong: The Bills already had what is emerging as one of the league’s premier secondaries.  Yet they drafted not just one, but two defensive backs. In the meantime, they failed to fill some of their more important needs like tackle and linebacker (they could have still used another prospect there after Edmunds). Despite many steals, they also took a couple guys too early, and they could’ve done a better job addressing their current needs. 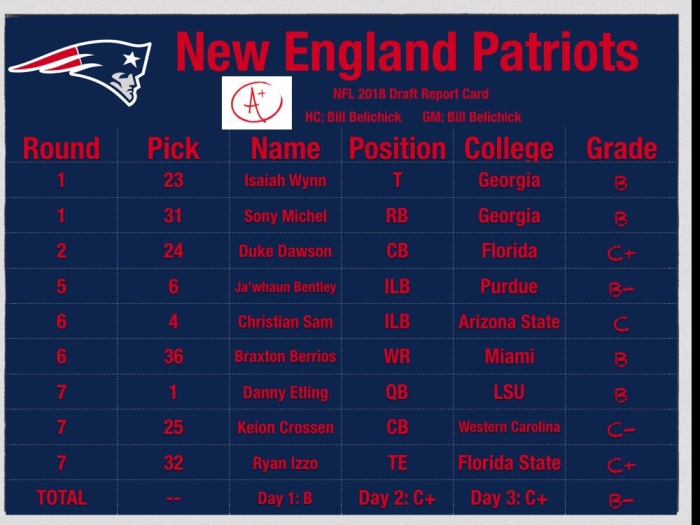 What They Did Right: The Patriots addressed all of their major needs despite many trades down. They ended up with nine total draft picks and they used them wisely. They eventually selected a QB, RB, WR, TE, offensive lineman, corner, and a linebacker. They started things off strong with two good players out of Georgia to address major needs. They also picked up a major steal in WR Braxton Berrios.

What They Did Wrong: The Pats may have waited too long for a QB, but reports say that they would have traded up if Baker Mayfield is available, which would not be the right strategy either. They could have also taken a linebacker or a tight end earlier. They had four picks in the first two rounds, and they used them on one T, one RB, one CB, and a trade down. I didn’t really see RB and CB as needs that were urgent enough to spend a first or second rounder on, and they did not need to trade down. Their grade gets a boost for addressing all their major needs, something no other AFC East team did in my eyes. But they waited too long for certain needs I saw as urgent. 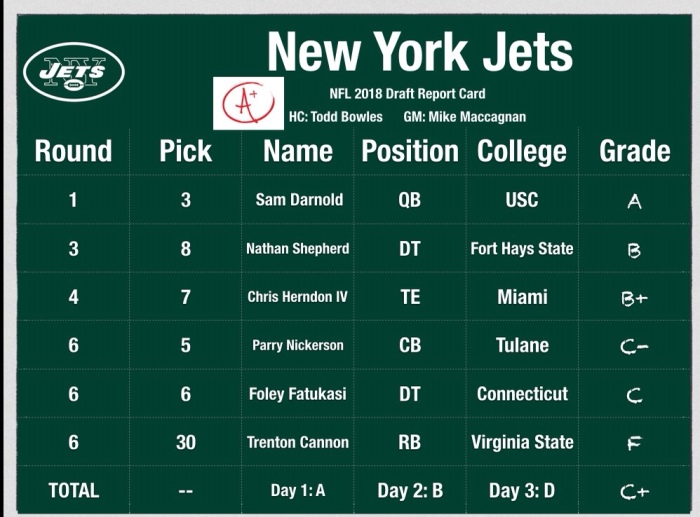 What They Did Right: The Jets started off strong by taking an NFL ready QB with the 3rd pick. I also liked the players they picked in the 3rd and 4th rounds. These two players addressed needs and are on my list of draft sleepers. But the Jets draft began to plummet from there. Day 3 did not end up looking so good for them.

What They Did Wrong: The Jets could have had a good draft if they continued to address their needs or take top available prospects in the later rounds. But they took CB Parry Nickerson when they did not need a corner, and took a running back I had never heard of when they were totally fine at running back. They have Isaiah Crowell and Bilal Powell to handle the backfield. I doubt the RB they drafted will ever make an NFL roster, let alone an NFL start. They also took another DT in Round 6 when they had already done enough to address the defensive line.  If they were going to take two d-linemen, at least one of them should’ve been a defensive end, which is more of where the Jets need d-line help.