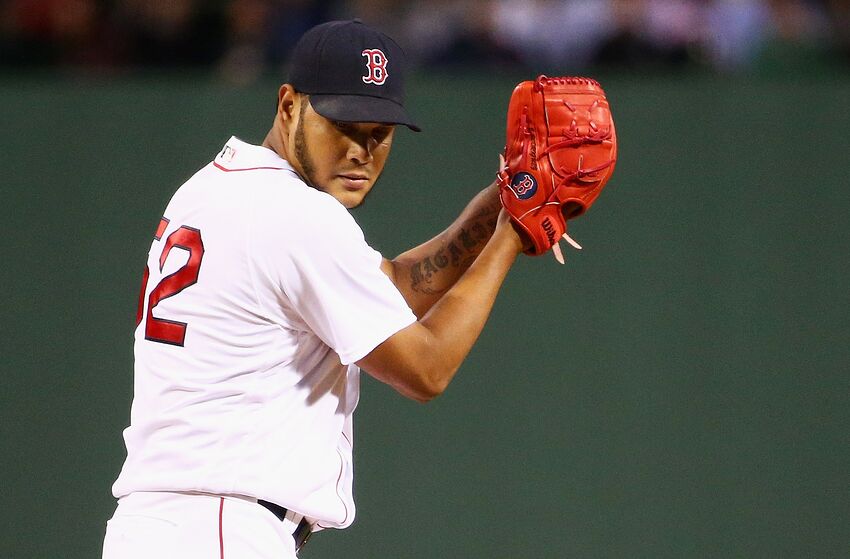 After a 7-1 start to the season for the Red Sox, things were not looking good for them today.  They were down 7-2 heading into the 8th inning, as the Rays had scored at least one run in six straight innings.  Eduardo Rodriguez had been knocked out of the game after 3.2 innings, forcing the Red Sox to use numerous relievers to finish off the game.  The bullpen struggled as Hector Velazquez, Bobby Poyner, and Brian Johnson gave up four runs in 3 1/3 innings But the Red Sox came all the way back to beat the Tampa Bay Rays 8-7 and extend their winning streak to eight games.  Hanley Ramirez and Mookie Betts extended their hitting streaks to 7 games each, as they led the Sox offense.

The Red Sox started off strong with a leadoff double by Mookie Betts, and Betts was driven in by Hanley Ramirez’s groundout.  But the Rays struck back quickly, with DH C.J. Cron hitting a solo homer.  Early on, Eduardo Rodriguez was doing well, striking out five batters, including the side in the 1st inning.  But the Rays were working the count and and E-Rod’s was over 70 after three innings.

While the Rays were not crushing the ball after Cron’s home run, they scored one run every inning from the 2nd all the way to the 7th. In the 3rd inning, E-Rod gave up a walk followed by a infield single that was originally ruled an out. Matt Duffy was clearly safe, so it was a smart challenge by the Rays.  The run scored on a double by Carlos Gomez.

In the 4th inning, Daniel Robertson reached on another infield single for the Rays.  3B Rafael Devers could not make the throw in time.  That was followed by a Brad Miller walk, and Adeiny Hechavarria drove in the run with a bloop single that Andrew Benintendi couldn’t quite get to.  The Rays were trying to continue the rally, as Matt Duffy singled again after E-Rod left the game, but Hector Velazquez came in to get the last out.

Velazquez gave up a run in the next inning, as Daniel Robertson singled, stole second, and came home on Brad Miller’s base hit.  The Sox chipped away in the bottom of that inning.  They loaded the bases after a walk, a Christian Vazquez single, and another walk.  Rays reliever Ryan Yarbrough had come in to replace Andrew Kittredge after two innings. Today, the Rays reliever combo to start was game was able to hold the Sox to just two runs through six innings, but it was not easy.

With two outs in the fifth, Hanley Ramirez ripped an infield single that Adeiny Hechavarria snagged to save more runs from scoring.  J.D. Martinez followed, but struck out with the bases loaded. Martinez was the only Sox starter without a hit, but that did not keep the Sox from winning.

The Rays scored again in the 6th after Kevin Kiermaier hit a triple off the Green Monster to drive in Matt Duffy, who had walked.  Kiermaier hit the triple off of Bobby Poyner, but Velazquez was charged with the run as he had walked Duffy before leaving the game.  Brian Johnson came in in the 7th and struggled, giving up two more runs.  Daniel Robertson walked, and came home on a triple by pinch hitter Joey Wendle.  On that play, Xander Bogaerts hurt his ankle as he had to chase the ball into the Rays dugout after throwing to third before Devers was there.  He will be evaluated further on Monday, but his timetable is currently unknown. Bogaerts was helped off the field, and it was really concerning when he couldn’t leave without assistance because he has been Boston’s best hitter so far this season.  Brock Holt came in to replace him.

Tampa scored their second run of the inning off Johnson after a sac fly drove in Wendle.  The Sox failed to get things going in the bottom of the 7th, but after Carson Smith came into the game, the Rays failed to score another run.  They loaded the bases after a walk, a Carlos Gomez single, and a walk.  But Smith escaped the inning by striking out Daniel Robertson.

This looked like it was going to be a Rays win, as after Hanley Ramirez led things off with a single and advanced to second on a wild pitch, the next two batters struck out and flew out.

But with two outs, Mitch Moreland, who was a doubles machine last year, hit his first double (and hit) of 2018, driving in Ramirez to make it 7-3 Rays.  Eduardo Nunez singled and Moreland advanced to third.  Rafael Devers then knocked a ball down the third base line that bounced off the left field garage, allowing both Moreland and Nunez to score.

With that, Rays reliever Matt Andriese was done, and Rays closer Alex Colome came in, hoping to secure the 7-5 lead the Rays were still holding on to. The Red Sox had done well against Colome in the home opener. Just in case the rally continued, Cora got star closer Craig Kimbrel warming up in the bullpen next to Joe Kelly.

Christian Vazquez kept the rally alive with a base hit.  Devers scored, making it 7-6 Red Sox.  Vazquez advanced to second on another wild pitch.  Mookie Betts tied it up with a line single to left as Vazquez came in to score with a nifty slide to avoid the tag.  Andrew Benintendi kept the rally alive by doubling to the left field gap to drive in Betts.  The outfielders were playing shallow as Benny’s double did not reach the Green Monster. It was now 8-7 Red Sox.

Kimbrel came in and quickly retired the side, as the Red Sox locked up their comeback victory, 8-7.  This was by far their most exciting game of the season.  The Sox faced easy opponents, but the Red Sox are now 8-1 to start the season, their best record ever after nine games. They had not even started 7-1 since 1904, a World Series-winning year.

The Red Sox head into their three-game series against the Yankees on fire.  Will they win their first series against their archrivals?  The Yankees have been depleted by injuries, and are just 5-5 after losing to Baltimore today in a 12 inning game.  With Gary Sanchez, Greg Bird, Brandon Drury, Aaron Hicks, Jacoby Ellsbury, C.C. Sabathia, and Billy McKinney all injured, the Sox should certainly have the edge.