It was the bottom of the 7th, with the Sox down 6-3.  But the bases were loaded for Mookie Betts.  He flew out, but Vazquez scored from third.  That was followed by an Andrew Benintendi single that knocked in JBJ.  After Hanley Ramirez loaded the bases again with a walk, Mitch Moreland came in to pinch hit.  He got a nice pinch hit single, and both Nunez and Benintendi scored!  The Red Sox had taken the 7-6 lead with a 4-run 7th!

The Red Sox won the series opener against the Yankees 9-6, in a back and forth game.  Drew Pomeranz did exit in the 4th with back spasms, and the bullpen gave up 6 runs in the next 3 innings.  However, the Red Sox were able to come back as the offense sparked and both Addison Reed and Craig Kimbrel had good outings.

Pomeranz started off the night strong.  He struck out 4 and gave up just 4 hits in the first 3 innings.  Meanwhile, the Red Sox offense was ambitious to start off the game strong.   With 2 outs in the bottom of the 2nd, Xander Bogaerts hit a huge double off the monster that almost left the ballpark.  Then with Bogey on 2nd, the red hot Rafael Devers came up to bat.  Devers hit it in the same direction, right towards the monster.  But this one was gone!  Rafael Devers had hit another home run, his 7th career dinger, and he had only played 19 games so far.

The Red Sox had a 2-0 lead through 3.  However, in the 4th, Pomeranz started throwing the ball way off, and they knew he was hurt.  He had to be pulled from the game.  Christian Vazquez extended Boston’s lead in the 5th though with a leadoff solo shot.  He crushed it and it almost left the park completely.

But the Yankees struck back in the 6th.  Headley singled, and Todd Frazier hit a 2-run shot to left center.  The Red Sox were leading 3-2 but the Yankees were on a roll, and it continued in the 7th, starting with a Gary Sanchez leadoff solo shot to tie the game. 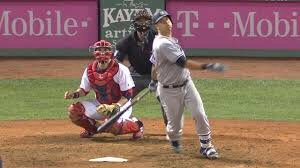 The Yankees weren’t done after that.  Joe Kelly walked Gregorius and Headley singled to make it 1st and 2nd.  Then Heath Hembree came in, only to walk another batter and load the bases for Ronald Torreyes.  Torreyes hit a long single off the monster, and not just 1, but 2 runs scored.  It was now 5-3 Yankees.

The Yanks weren’t done either.  A Brett Gardner walk loaded the bases again, and after Robby Scott, the third pitcher of the inning hit Aaron Hicks by the pitch, the Yankees had a 3-run lead!  The Red Sox ended up bringing in Addison Reed to finish the inning, their 4th pitcher in the 7th.

But the Red Sox struck back in the bottom of the 7th.  Vazquez got on base again with a single, and JBJ walked to make it 1st and 2nd.  Nunez got on base on an infield single, and the bases were loaded with just 1 out.  Mookie Betts hit a sac fly to score in Vazquez.  Then with men on 1st and 2nd, Benintendi singled to knock in JBJ!  It was now just 6-5 Yankees.  The Red Sox were coming back, and Mitch Moreland got the lead back for Boston with a pinch hit 2-run single!  It was now 7-6 Red Sox going into the 8th.

Addison Reed pitched a quality inning for the Sox, and they scored again in the 8th.  Devers singled and Vazquez walked.  With JBJ batting, they each stole a base!  So JBJ was up with 2 runners in scoring position, and single was enough to knock them both in.  Now the Red Sox were the team with a 3 run lead.

Kimbrel came in and struck out the side to end the game!  The Red Sox had won 9-6!  What a game to start another series in this epic rivalry.

Chris Sale takes the mound tomorrow in hopes of another 10+ K game, and a win for the Red Sox.  Will the Sox clinch the series with their ace on the mound?