The Red Sox came through again.  They topped the Blue Jays 8-7 in a high scoring showdown.

Brian Johnson really got rattled early.  In the first inning, Kevin Pillar led off with a double, followed by an RBI single by Kendrys Morales.  1-0 Jays already.  But Toronto wasn’t done.  Tulowitzki got a base hit to make it first and second and a Justin Smoak double scored a second run.  The Jays were up 2-0 in one inning.  Johnson was able to get out of the inning after that.  But in the 2nd, after a walk, Pillar doubled again, and after intentionally walking Jose Bautista, Johnson was stuck with the bases loaded.  Thankfully, the Red Sox defense helped him get out of the inning without a run.  Hopefully, they’ll do the same for Rick Porcello tonight.

The Red Sox struck back in the third though.  Bogaerts and Benintendi started he rally with back to back singles.  Then Betts made that three singles in a row and a run scored.  2-1 Toronto.  After a strikeout, Mitch Moreland hit another RBI single to score two more runs!

The Red Sox took the lead back in the 5th though.  Betts got another base hit, and Hanley Ramirez knocked him in with a long double over Jose Bautista’s head.  It was 4-3 Sox.  But the next at bat, Moreland hit his 10th double of the year to knock in Hanley Ramirez.  That was Moreland’s 3rd RBI, and it was 5-3 Red Sox.  After that, Stroman was done.  Aaron Loup came in, but Sandoval just got another RBI hit to knock in Moreland!  6-3 Sox.  The Blue Jays went to their bullpen again, and Dominic Leone finished the inning.

The Blue Jays just struck right back though. Russell Martin crushed a solo homer, and the Jays narrowed the lead to 2 runs.  It was 6-4 Jays to end the 5th.

But in the top of the 7th Mookie Betts answered.  He nailed a solo shot to left, and made it 7-4 Red Sox.  The 3 run lead was back.  Betts also had his first homer.  The one week I don’t start him in my Home Run Derby pool, he hits a homer!  But it’s good for the Sox. 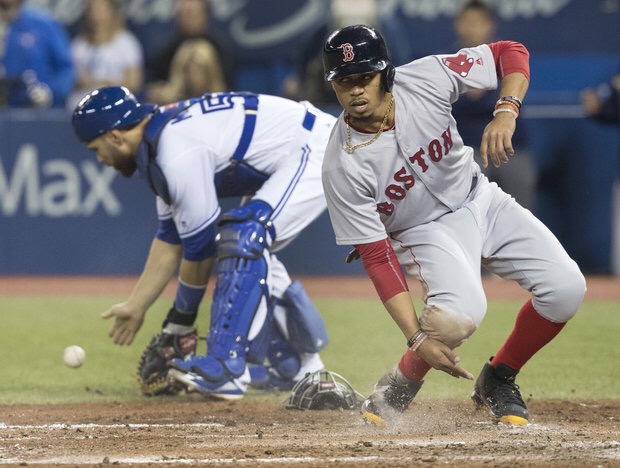 After Brian Johnson was done, the Red Sox bullpen actually did a somewhat good job quieting down the Jays.  They got in a couple of jams, but managed to hold the Blue Jays without a run for a few innings.    Kevin Pillar actually hit a third double, but Fernando Abad and Matt Barnes (after Abad was done) got them out of the inning. The Blue Jays also had 1st and 2nd in two other innings, but the Sox managed to shut them down.

In the top of the 8th the Sox scored again.  Pablo Sandoval started it with another base hit!  He was 3 for 4 on the day, with one RBI.  The Jays almost got him out on a pickoff but after a review, he was ruled safe.  After Marco Hernandez walked, Benintendi drove in the run with a ground rule double. It was 8-4 Red Sox going into the bottom of the 8th.

After a quiet 9th inning for the Sox, Barnes stayed in the game for the bottom of the 9th.  But he almost blew the game.  After 2 outs, Russell Martin walked, and Steve Pearce hit an RBI single to knock him in.  Then Ezequiel Carrera pinch hit, and he nailed a two-run homer to make it 8-7.  It was a close game now.  The Blue Jays almost came back.  But Matt Barnes put them away before any more scoring occurred.  This was all with two outs, so all that was needed to end the inning was one line drive.  That was it.

The Red Sox just barely saved the game, a game they would’ve lost without an explosive lineup.  Brian Johnson actually got his first major league win.  The Sox cannot do this every game, but they’ve somehow won 4 in a row since Porcello’s horrid start on Friday.

Porcello starts again tonight.  Will the winning streak live on or will the Red Sox and Porcello blow it?  Check out my latest Baseball Bits for more on Porcello’s case.