Welcome to the start of my weekly Red Sox column. This week was an interesting week. We started the week with losses in which we struggled with RISP. Something was off with our lineup, whether it was injuries or just a bad night. Speaking of  injuries, we’ve also seen Travis Shaw (who’s back) and Chris Young go down. We also will look at Brock Holt and Ryan Hanigan’s rehab. Lastly, the ASG Voting ends in 7 days, and there’s a lot of good news for the Red Sox.  Let’s dig in to this week’s top stories and I’ll tell you what I think.

Brock Holt and Ryan Hanigan Working Their Way Back

Both Brock Holt and Ryan Hanigan have began rehab assignments.  Holt was cleared on Monday for rehab and has been in the Triple-A-Pawtucket lineup.  Holt is 5 for 15 in Pawtucket so far, and was held back due to being ejected on Thursday night for arguing balls and strikes.  He was originally expected back at the end of this past week but may need a few more rehab games now.  Hanigan has went 2-9 in 3 games at DH.  He will not be ready to play catcher until later this week.   Holt and Hanigan have been missed, especially with Chris Young and Blake Swihart also nowhere near rehab for their injuries.

Young to DL, Bryce Brentz Up 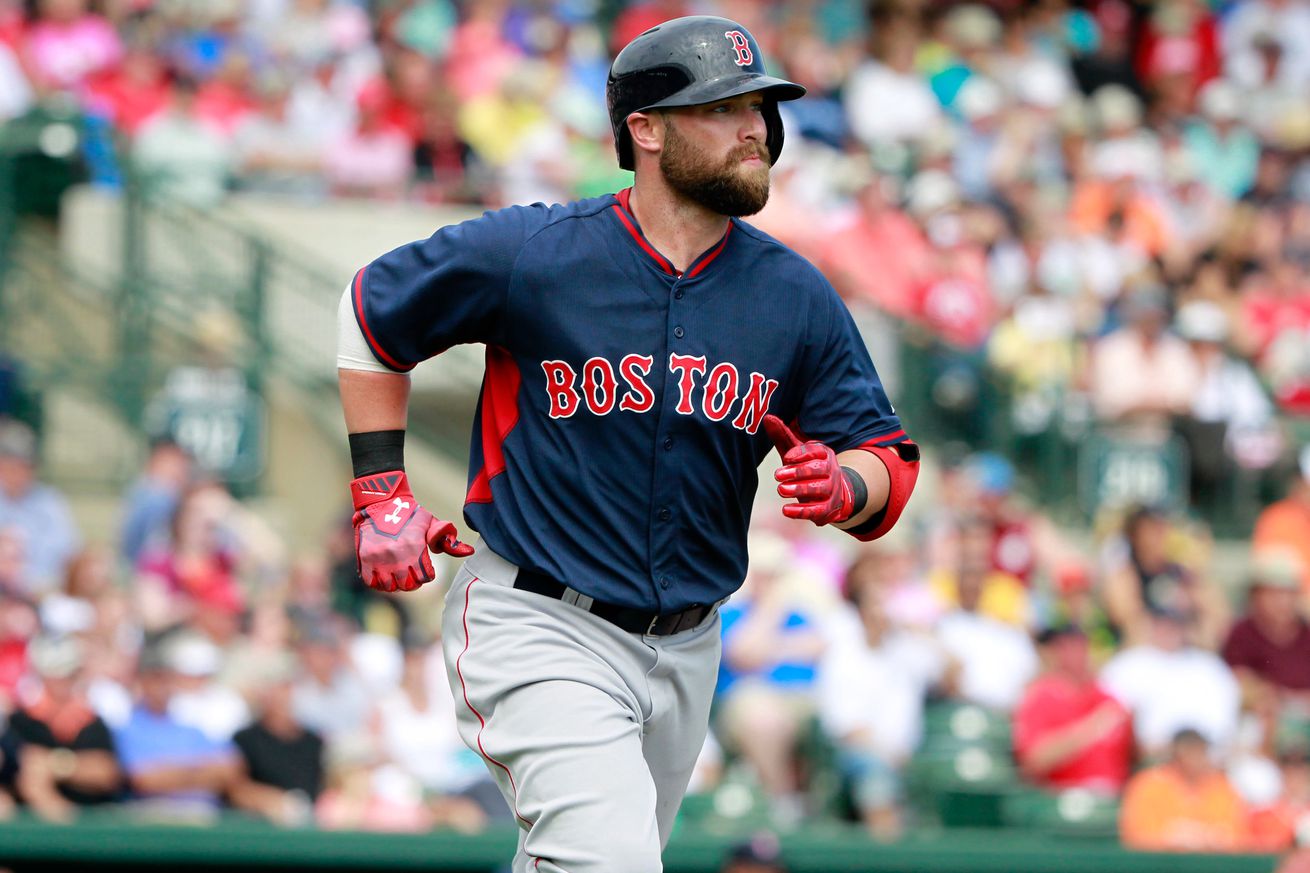 Chris Young was placed on the 15 day disabled list following Thursday’s game with a pulled hamstring.  Bryce Brentz was called up from Pawtucket.  Until now, Brentz did not have much MLB experience, just a few games at the end of the 2014 season, but this time, Brentz has performed a little better, including 2 nice saves in the outfield before getting creamed by the Rangers offense last night.  Personally though, I don’t think Bryce Brentz should’ve been the one called up.  Brentz has been in our system for a few years now, and besides during injuries or in September, he has not been called upon.  This is because he hasn’t been able to prove that he tops other players.  Sure, we don’t have many other options right now.  Rusney Castillo escaped the waiver wire after going unclaimed, but his inconsistency clearly isn’t worth the money and he was optioned outright to Pawtucket.  What about Andrew Benintendi?  I know, they don’t want to rush him but why not give him a try?  He is a highly anticipated prospect who as actually made progress, especially more than Bryce Brentz.  I may be wrong if Brentz keeps this up, but as of right, I would give top prospect Benintendi a chance.

With Ryan Hanigan inching towards his return, the Red Sox have a big decision.  A month ago, this discussion would be off the table.  Is Sandy Leon going to stay in the majors.  Leon has hit over .500 after hitting under .200 for the rest of his career.  Leon suddenly is a catcher that you want pinch-hitting every other day he doesn’t start.  The Red Sox can either keep Hanigan down (not likely), send Leon down and give up on him, or keep 3 catchers on the roster and send a reliever or bench player down.  I think keeping 3 catchers is the right way to go.  They need the bench depth, and they can option an unnecessary 8th reliever down.  Leon has put up stellar numbers at the plate, and it would be helpful to have him pinch hit for Vazquez and Hanigan, who would switch off starting.

The Red Sox lineup has been hot all year.  Whether it’s Big Papi showing flashes of greatness, the Killer B’s working their 5-tool abilities on opposing pitchers or an unexpected player having a strong night, there’s always someone active in this overpowered lineup.  Right now, Jackie Bradley Jr., Xander Bogaerts, Mookie Betts and David Ortiz look to be in line to earn an All Star Game start.  Each player has an average above .290, Ortiz leads the league in RBI, Bogaerts has one of the top averages in the league, and Ortiz, JBJ and Betts have a combined 47 dingers, each of them with at least 13.  Bradley and Bogaerts are the top 2 players in hitting streaks this season, and Betts and Papi also had hitting streaks 8 games or greater at one point or another.  The Red Sox could be in for a big All Star Game, and it’s well deserved.  There are 5 days left to vote, so Red Sox fans still have a chance to maintain this or make it better.

Kelly To Return As Reliever and other Rotation News

When Joe Kelly returns from his groin injury, it may be as a reliever.  Kelly was sent down to Pawtucket after a terrible start, and injured his groin in his first start there!  Kelly’s recovery is going slowly, but he could be in line to return to the major league level.  He hasn’t done anything yet to prove he’s worth another start, but the Red Sox are lacking bullpen depth, and Kelly could be the guy to help, as he has proven to be decent in short periods of time.  Meanwhile, the 5th spot has been occupied by Clay Buchholz.  Roenis Elias did terrible in the one chance he got, so Buchholz had his chance to prove himself once again.  Buchholz was shaky last week, but will get another chance today.  The Red Sox could look for an elite pitcher after a June Swoon.  They have shown interest in Julio Teheran, but do they have the prospects to give?  They may be willing to let go of a top prospect, as even David Price, Steven Wright and E-Rod have had rough times.

That’s all for my column this week.  Do you ant more Red Sox analysis?  Check out my game recaps, and coming soon, I will have a Red Sox Trade Deadline Preview.