Welcome to my Week 15 NFL Picks and Previews.  Last week was a rough week, as I went 6-10, putting my overall record at 115-92-2 (117-93-2 including TNF and Saturday).  I am still only ahead of 1 expert (Jason La Canfora of CBS Sports). This week, many teams have a chance to lock up playoff spots, but will all of the current contenders keep rolling this week, or will some fall behind as other teams rise?  The Patriots take on the Steelers, and the Saints play the Panthers in Carolina, so there’s bound to be a couple teams knocked out of contention.  Pittsburgh, who’s already just 7-5-1, faces not only New England but also the Saints on their remaining schedule.  This could open the door for the Ravens and Browns in the AFC North.  Keep reading to find out what I think, and feel free to comment with your thoughts.

The Redskins won’t be able to do much offensively with Mark Sanchez and Josh Johnson as their QBs.  The Jags may have struggled this season, but their defense is still easily top 10 in the NFL. This will open the door for young QB Cody Kessler and the Jaguars to put up a strong offensive game in a blowout win.  The Redskins defense will lack motivation considering how badly the offense is doing, allowing Kessler to toss multiple TD and the Jacksonville run game to dominate. 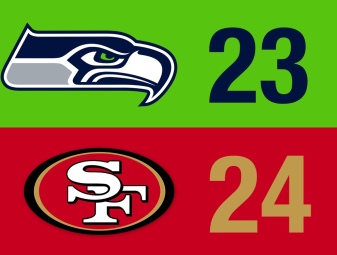 Seattle has been strong at home this season with a 5-2 record.  But on the road, they are a measly 3-3. We’ve seen what Niners QB Nick Mullens is capable of.  Against an inexperienced Seahawks defense, I could see Mullens having a big game and leading San Francisco to pull off an upset.  The Niners run game will struggle though, since RB Matt Breida is not 100%.  Seattle should have a decent game offensively, but they won’t be able to compete with Mullens’ dominance, and QB Russell Wilson will struggle to connect with any WR who isn’t named Tyler Lockett.  Mullens will prove that although he’s not the future of the Niners, he is a capable QB who can handle the weaker defenses in the league with ease.

That’s all for this week.  Stay tuned for more posts soon.

Welcome to my Week 4 NFL picks and previews.  It was a rough week for me last week, as I finished 6-10.  But luckily, I’m still 27-19-2 (28-19-2 including TNF Week 4) due to my strong week in Week 2.  I’m still ahead of 9 of ESPN’s 10 experts, and half of CBS Sports’ 8 experts. There have been a lot of surprises in the NFL so far this year.  Unexpected contenders have emerged, and what were perceived as some of the NFL’s best teams are struggling to keep up.  I definitely think this week will set some things straight.  Some of the expected contenders will start to surpass the surprise teams.  The question is, which surprise teams come down to earth first?  Keep reading to find out what I think.

QB Sam Darnold and the Jets offense looked good in the first couple weeks.  But this offense is still very young and has things to learn. I expect this dominant Jaguars defense to tear apart New York’s offensive game plan.  The pressure of Sacksonville will get to Darnold, which will mess up the entire offensive scheme for the Jets. The Jaguars offense doesn’t have to have a field day to win a game, and they’ve made that very clear.  RB Leonard Fournette will likely return this week.  They had been fine without him, at home against the Patriots!  Given that, this home game against the Jets with Fournette back should be a clinic in Jacksonville’s favor.

QB Sam Bradford had clearly declined, and after two weeks, all Cardinals fans knew Bradford wasn’t the answer.  But Steve Wilks has finally put QB Josh Rosen in as the starter!  Rosen was my favorite QB of this year’s draft, and I expect him to completely turn around the Cardinals offense this week.  I don’t expect this kind of consistency throughout the year in 2018.  But this will give us a glimpse at what the Cardinals invested in down the road, kind of like what the Jets received from QB Sam Darnold in his first game.  I think Rosen can handle the rebuilding Seattle defense on his home turf. Look for Arizona’s tight ends to have an especially strong game as well.  Meanwhile, the Seattle defense will struggle to contain Rosen and RB David Johnson.  Their offense will see slight improvement with WR Doug Baldwin likely to return, but nothing significant as Arizona pulls off the upset at home.

That’s all for my Week 4 picks and previews.  Feel free to comment with your thoughts.

Welcome to my NFL Week 3 picks and previews.  I had a great week last week, finishing 12-3-1,  That brings my overall record to 21-9-2, better than any ESPN or CBS Sports expert besides Pete Prisco.  If I told you who the current 2-0 teams were before the season started, most of you would be shocked. The Dolphins? The Bengals? The Chiefs?

According to NFL Network, 2-0 teams make the playoffs 64% of the time.  But those odds go up to 75% if they become 3-0. So as NFL Network put it, this is a big week for those 2-0 teams.  Which of them are contenders, and which are pretenders? We will likely get a glimpse at that this week.

I know a lot of you think the Vikings are going to blow out the Bills, but it’s hard to imagine any team blowing out another without their star running back (still see the Vikes winning though).  With RB Dalvin Cook out, this becomes the biggest lock in my eyes. The Chiefs defense isn’t anything special, but I think they’ll keep QB Jimmy Garoppolo’s young receivers covered, leaving Garoppolo scrambling to find an open man.  Meanwhile, I cannot see the 49ers defense stopping QB Patrick Mahomes II. Expect Mahomes to toss a few more touchdowns and lead the Chiefs offense to dominate. RB Kareem Hunt will also have a strong game.

The Ravens were topped easily by the Bengals last week, and I see Cincy as a pretender who’s just riding an easy schedule to a winning record.  So, I don’t think the Ravens will be able to do much against this shut down Denver D, even at home.  I think the No-Fly Zone will be back up to full speed this week against QB Joe Flacco’s mediocre receivers.  I think the Ravens defense will have a strong game as well, leaving QB Case Keenum with less open men and less TD opportunities than he had in the last two games. But I do think Keenum and the Broncos will find a way to pull off the upset in Baltimore.

That’s all for my picks for this week.  Comment with your thoughts, and stay tuned for more posts soon.