Today, thanks to The Mark Fidrych Foundation, I was invited to play in their 8th annual charity softball tournament.  They sponsored me and all the friends and family of the Northborough Challenger Baseball League.  Like in past years, it was a great way to put a closing on my Challenger Baseball season. The Fidrych Foundation has sponsored my team for the last 5 years and I am so appreciative to have the opportunity to play organized baseball.

Today’s event, held at Memorial Field and Casey Field in Northborough, was even more exciting than last year’s event.  I played third base on the Challenger/Miracle League team and my dad Ken played with me on the field at first.  He batted after me and you can see us both on the bases below.

I had the opportunity to spend some time with some of my teammates after the game, including NCAA 1989 Final Four basketball star for Illinois, Matthew Schnaderbeck, along with his wife, Catherine, and his two daughters, Jessica and Alexis.  Here’s me with Matthew and his daughters after we had lunch.

I had a lot of fun playing softball and even caught a hot line drive hit right to me at third and also made a few plays throwing to my dad at first.  My teammates and I all got to bat twice, once each inning, so I was happy to get two hits.  After I finished playing, I met up with one of my long time Challenger coaches, Sean Durkin, who has taught me so much over the years and he told me he was proud to see how well I played.

Before leaving, I was very excited to get some photo opportunities with some well-known sports personalities. First, I took a photo with Tessie the Green Monster.  After that, I met up with Women’s Olympic Hockey Gold Medalist Haley Skarupa.  Last but not least, I met up again with sports broadcaster Joe Braverman, who graduated from my high school, Algonquin Regional High School and now I am trying to follow in his footsteps with the same great high school sports coverage that Joe did for four years.  I have already started with “Gonk Knocks” covering the T-Hawks football team and look forward to getting some help from Joe during the year.

I’d like to thank Ann Fidyrich and the entire Fidrych Foundation staff and volunteers for sponsoring me year after year to play baseball and softball in the Spring and Summer.  Today’s event was a lot of fun and I can’t wait to play again in the Spring. 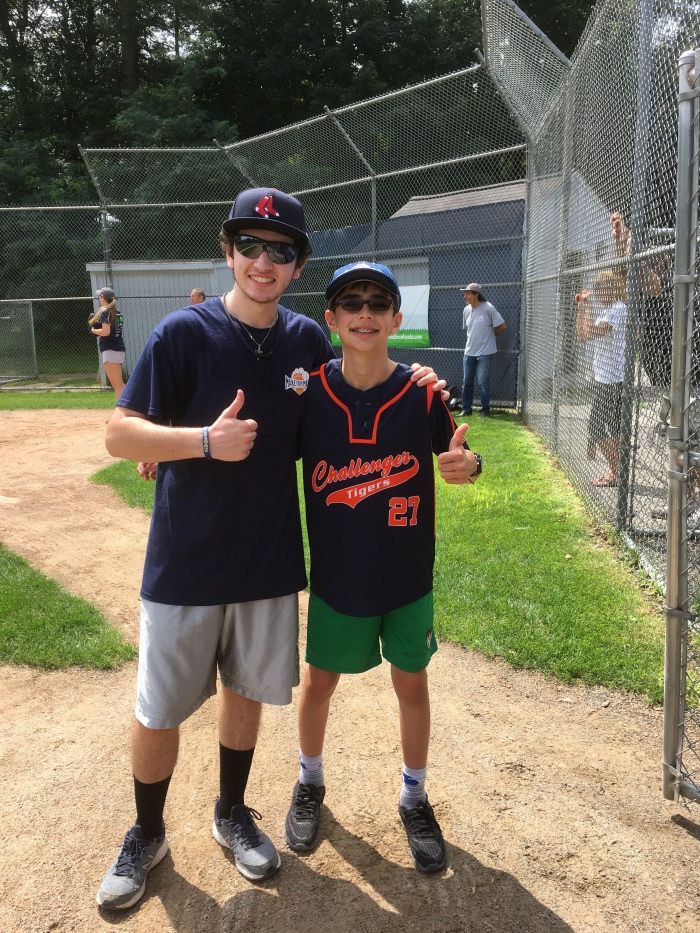